September 6, 2017: PennEnergy says gasoline situation in Texas is returning to normal.  Clearly panic buying and hoarding contributed to the problem but there are stations that ran out of gasoline on September 1 and have still not opened as of today -- there was no panic buying at their gas stations; their supplier still unable to re-supply.

September 1, 2017, 00:32 a.m. Central Time: the main road from our apartment complex to the home where the granddaughters live is a busy, busy thoroughfare. Earlier this evening I dropped off the oldest granddaughter after water polo practice and then drove home. It was eerily quiet: no cars on this stretch of road, when normally it would be quite busy. Literally, everyone is rationing their single tank of gasoline in whichever car they were fortunate enough to have when they got their last "fill-up."

Later, 9:57 p.m. Central Time: it appears that every gas station on this side of DFW (the north side) is out of gasoline. There is one gas station that appears to have done the right thing and is rationing the amount of gasoline it will dispense to any car. It appears to be the only station still selling gas, but I assume it will be out of gas by midnight. And then that's it. I assume the entire DFW area is now out of gasoline. When/if gasoline starts flowing again, everyone will need gasoline and the cycle will start again.

Later, 1:58 p.m. Central Time: because of panic buying of gasoline and the likelihood that the city of Austin, TX, will have no gasoline available on Monday, Labor Day, the three-day Labor Day soccer tournament scheduled for venues on the north side of Austin has been canceled. What a shame. And the nation (and Texas) has a record amount of gasoline. And most of it will be in gasoline tanks in SUVs parked in garages and on driveways over the weekend. The good news: the soccer coach is working on getting the team scheduled for another soccer tournament in the DFW area.

Later, 1:03 p.m. Central Time: yes, it's already happening. My wife just sent me an e-mail that:
Based on the anecdotal data in that e-mail, we can now confirm (if ABC phones us) that one out of three gas stations in the DFW area are now out of gasoline, Thursday, the day before the Friday before the three-day Labor Day weekend.

We have sent an e-mail to our older daughter to fill up when she gets a chance.

Disclaimer: this was done quickly. I may have missed something. There may be factual and typographical errors. If this information is important to you, go to the source.

Starting last night, here in north Texas folks have been advised to keep their gasoline tanks full due to the impending shortage of gasoline in Texas, anticipated shortages extending from the southeast coast up to Dallas-Ft Worth as mainstream media endlessly report that the end is near.

This morning on my bike ride the message is being heard. Long lines are already forming at our neighborhood gasoline stations. If everyone fills their tank today and in tomorrow, I would assume many gas stations will run out of gasoline by mid-weekend, but at least all those folks that aren't traveling over the weekend will have a tank full of gasoline (or more, if they own multiple cars) sitting in their driveways.

President Trump has already responded to Senator Markey's request and has released 500,000 bbls of crude oil from the SPR. That allotment will go to the Lake Charles Phillips 66 refinery. Some data points about that refinery:
Go Phillips!

By the way, the largest refiner in the US, Motiva, burns through 600,000 bbls of crude oil/day and will be shut down for three weeks. A delivery of 500,000 bbls from the SPR would not meet the daily capacity needs of Motiva. Just saying.

Record amount of gasoline produced in the week prior to Hurricane Harvey. Source: 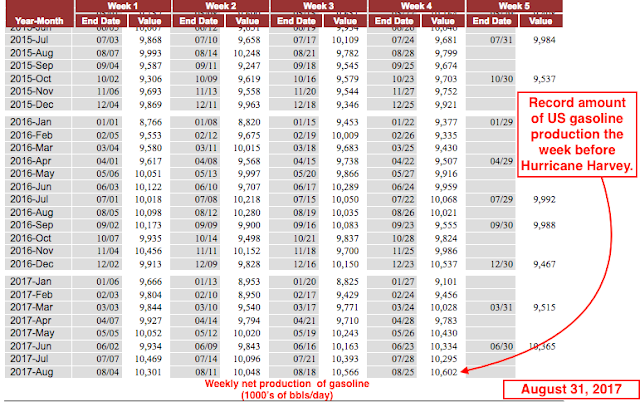 Record gasoline demand in the week prior to Hurricane Harvey (this data would have included the largest US automobile migration in modern history -- to experience the August 21, 2017, total eclipse.  Source: 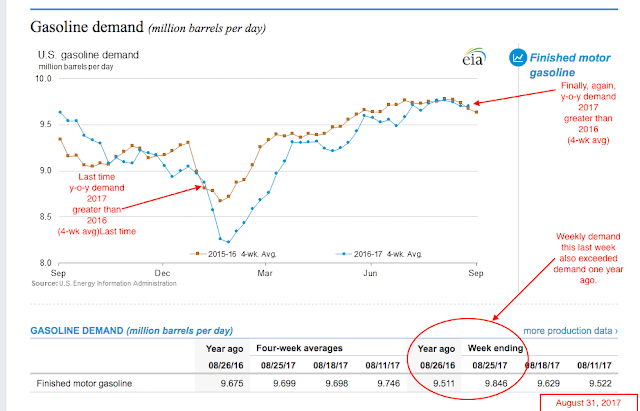 
Creeque Alley, The Mamas and The Papas
Posted by Bruce Oksol at 12:11 PM