I'm going over the most recent Mike Filloon contribution to SeekingAlpha again. I don't think he mentioned this in his narrative, and I don't think I've seen it elsewhere. Here's the graphic. See if you can spot something fairly significant. 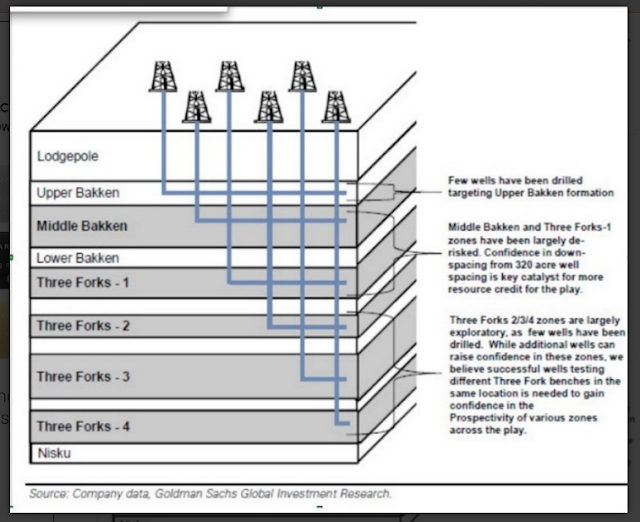 The graphic is from Goldman Sachs Global Investment Research, undated. Besides the obvious multiple formations that are highlighted, note the second bullet:


Middle Bakken and Three Forks-1 zones have been largely derisked. Confidence in downspacing from 320-acre well spacing is key catalyst for more resource credit for the play.

That one line could be interpreted a number of ways. But I think it's pretty clear, based on "downspacing from 320-acre well spacing," that analysts have already factored in 320-acre spacing for the middle Bakken and the first bench of the Three Forks.

I think regular readers of the blog have felt we've "always been there" -- at 320-acre spacing for both the middle Bakken and the first bench. I assume the analysts mean two middle Bakken wells/section and two TF-1 wells/section or eight wells per the standard 1280-acre spacing unit in the Bakken. If so, yes, we've been there for quite some time. (In fact, I already have a tag, "320_Acre_Spacing." See tags associated with this post for similar tags and similar posts.)

The analyst's do not specify "good" Bakken from "better" or "best" Bakken. This seems to imply an average across the basin. In some areas we are well beyond 8 wells in one standard 1280-acre drilling unit. In fact, if we can drill along section lines (in an overlapping 2560-acre unit, for example), the better and the best Bakken should easily be able to support six MB and six TF-1 wells in a 1280-acre unit. With 660-ft spacing, it's more than that.

Just idle chatter. Don't quote me on this. Keep it a secret.

At FAQs, question #2 (FAQs are not always updated; FAQs have opinions and facts are interspersed and I don't necessarily point that out):


In a January, 2013, presentation, the Director, NDIC, suggested that it may take as many as 48 wells/spacing unit to drill out some areas of the best Bakken. At the time he said that, most spacing units were two sections. Therefore, Lynn Helms was suggesting as many as 24 wells/section in the best part of the Bakken which includes productive formations from the middle Bakken through ALL lower benches of the Three Forks.