What Is Prince Salman Up To? OPEC's Pain Is Only Getting Worse As Revenues Continue To Fall -- Oilprice.com -- June 27, 2016

Later, 11:59 a.m. Central Time: see first comment. Brought up here so the comment be searched by the browser:

I believe there is a much bigger story unfolding here, with the government/environmental forces only playing a minor role.

CNG versus diesel for transportation needs, with the commercial sector leading the way, is apt to become more mainstream in a decade's time.

If an OTR trucking firm can save a thousand bucks or two - and they can - on a round trip cross country run, they will have a huge competitive advantage in the marketplace.

Many retail CNG prices, according to online sources, sell a GGE (gallon of gas equivalent) for $1.50 or less.

Retail infrastructure build-out for CNG continues and, in a self - reinforcing way - is accelerating.

Engine manufactures, both big and small, are researching and rolling out products fueled by CNG.

With an energy equivalence of 6 to 1, the price of natgas should be $9/MMcfd or, conversely, oil should run $18/bbl.

This economic/energy arbitrage poses enormous potential for those able to take advantage.

Original Post
The tea leaves are swirling. What is Prince Salman up to?

From an earlier post:
Saudi policy appears to be to continue inventory drawdowns for the foreseeable future.

Now we have this article from an oil hedge fund, oilprice.com:


OPEC lost $349 billion in revenue last year because of low oil prices, cutting revenues almost in half from the year before.

A report from the EIA in mid-June estimated 2015 revenues for OPEC countries at $404 billion, down 46 percent from the $753 billion the member countries earned in 2014. Revenues last year fell to their lowest level in eleven years.

Worse still for OPEC is the fact that revenues could fall even further this year, as low oil prices sank to new depths, particularly in the first quarter of 2016. The EIA projects OPEC revenues this year to drop to $341 billion. That will result in per capita oil export revenues in OPEC countries falling from $606 in 2015 to $503 this year. 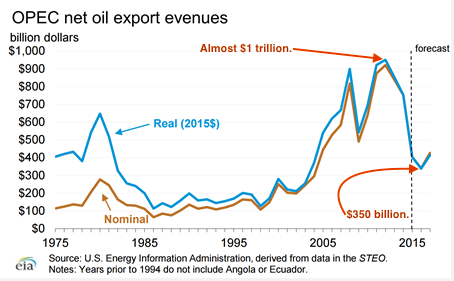 Not only is the drop precipitous, it takes OPEC back to 2004 revenues.


For its part, OPEC put out a more dire assessment of its own finances, putting its losses last year at $438 billion, much higher than the $349 billion estimated by the EIA.

That came even though overall exports climbed by an average of 400,000 barrels per day, or a 1.7 percent increase, largely because of production gains in Iraq and Saudi Arabia. The plunging revenue led to OPEC members to post a current account deficit of $99.6 billion, the first deficit since 1998. That compared to the 2014 surplus of $238.1 billion.

With regards to my thoughts on Prince Salman, go back to the very first link at the top of the page.

These standards are projected to reduce diesel consumption by 0.5 million barrels of oil equivalent per day by 2040. --- EIA

One-half million bopd by 2040 -- hardly worth thinking about.

The estimated reduction in boe, of course, goes out the window, if more folks buy medium- and heavy-duty vehicles than projected, which is very, very possible.

It's going to be a busy holiday weekend on the nation's highways.
A record 43 million Americans are expected to travel this Independence Day weekend.