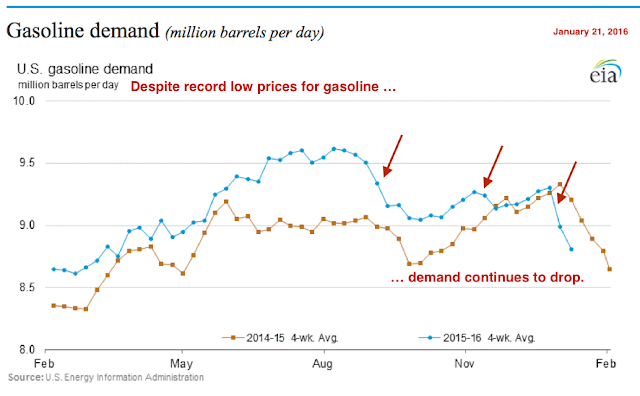 It was not worth the time to post the graphs; they look very similar to the graphs from last week.

As staggering as the graph was last week, it's even more staggering this week: US refineries processed a seasonal record of 16.2 million bopd, up almost 1.3 million bopd from a year ago.

US distillate consumption (mostly diesel, I assume) is at 10-year record lows. Diesel consumption corresponds directly with economic activity in the United States. Combine this with the gasoline demand story and it's not a pretty picture.

As staggering as the graph was last week, it's even more staggering this week: US gasoline stockpiles continue to increase dramatically, well above a 10-year high. Gasoline consumption is below the 10-year median despite the fact that gasoline is as cheap as it's ever been. The amount of gasoline stored in this country will last more than a day longer than at this time a year ago.

US natural gas stocks remain well above the 10-year maximum. I doubt the "historic storm" predicted for this weekend will change this graph very much next week.

Peak oil, anyone?
Posted by Bruce Oksol at 2:32 PM