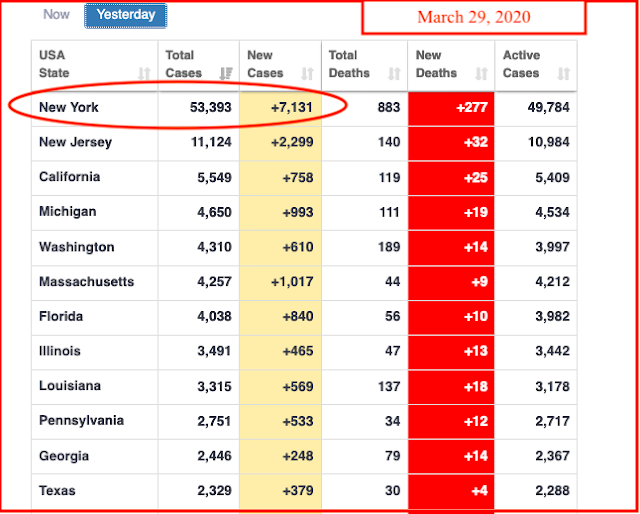 De Blasio: the poster child for --

March 5, 2020: Pocahontas drops out of the race; Schumer, Donna Brazile unhinged; the former threatens two US Supreme Court judges. US 10-year Treasury drops below 1%. A recurring theme on the blog: Hillary Clinton appears just about the time it becomes a political necessity for her. Power Line has noted the same thing. Her Hulu "documentary and her new podcast debut soon. From the link:


But isn’t the timing of a puff piece documentary and a podcast rather interesting? It’s almost as though someone thinks she should raise her profile just in case something happens to Joe Biden or Bernie Sanders.

Hillary was able to remove Bernie from serious consideration. Now, it's only Biden standing in her way.Jeffrey Epstein didn't hang himself.

Looking at the polls in states voting next Tuesday, it looks like Biden could wrap up the nomination next week. In many states Bernie may not even reach the 15% threshold to get any votes; in the few states where Bernie might be competitive, he won't take all the delegates.

March 4, 2020: who really "won" Super Tuesday? On top of this, Biden won in states that will not vote for the Democrat nominee in November.

March 2, 2020: Chris Matthews quits; Bloomberg predicts brokered convention where super-delegates/elites, not the voters, decide the nominee; coronavirus headlines bad, but percentages actually look good. "Daily Note" format changes. The "daily note" will now be a single post with updates throughout the date, but it will not be posted until at least the next day. The reason: I want only Bakken-related news to be the focus of the blog.

February 29, 2020: less than one minute after the polls close in South Carolina, MSNBC declared Joe Biden the winner. Clyburn is the king-maker in South Carolina. Biden got 60% of the black vote in that state.

February 23, 2020: Richard Grenell is now highest-ranking openly gay official in US government history. FBI Director J. Edgar Hoover must be rolling in his grave. LOL. President Obama never appointed an openly gay cabinet member, a source of bitterness for LGBT activists at the time. Link here. I watched cable news pretty closely this past weekend because of the Nevada primary/caucuses. Not once was this story reported. I would have completely missed it except for the internet. Nor has there been any discussion of the long list of female felons he pardoned. Thank goodness for the internet.