This Is Page One
Page Two

May 2, 2020: NYT now calling for DNC investigation into Biden sex assault allegations. NYT says the media should not do the investigation; needs to be done by professionals, like the DNC, run by Obama and Hillary, who have both endorsed Biden. My hunch: NYT and Hillary's war room coordinated on this one. 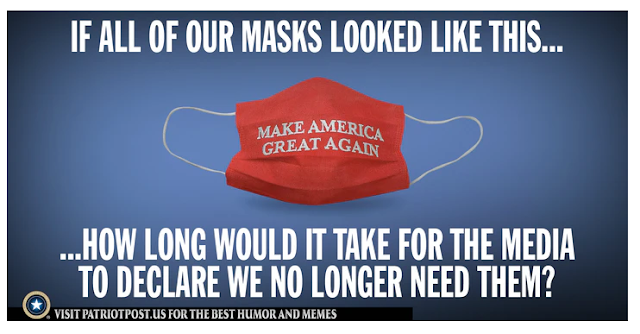 April 15, 2020: this should be concerning. Rasmussen daily presidential tracking has Trump trending downward, now at 44% vs 48% now long ago. One cannot compare Trump/Obama polls, as Rasmussen does; the events are so incredibly different. Having said that, at this same point in Obama's presidency, he was also trending lower, at 45%. 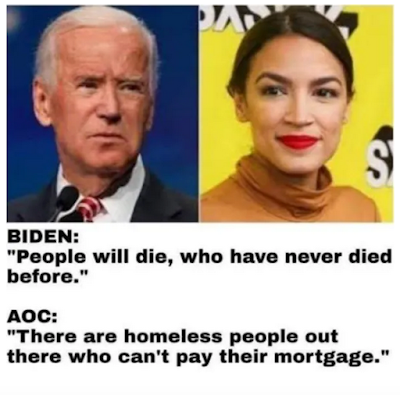 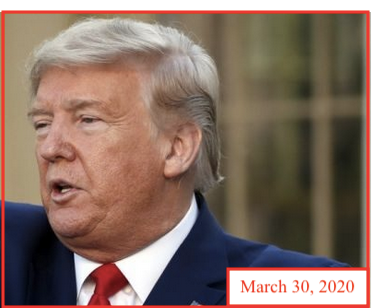 March 27, 2020: President Trump signs a $2 trillion bailout/stimulus/New Green Deal bill (with add-ons that could add an additional $4.6 trillion, or something like that). Hillary tweeted a(n) highly immature, non-presidential tweet (anyone else would realize the error and would delete it; I'm not sure about Hillary). Rasmussen: 46% Trump; 47% Obama at same point in presidency. Considering what Trump has done for the nation during this panic/pandemic, his ratings speak volumes about the extent to which the press can influence the nation. He should be topping 75% approval. What more do folks want? 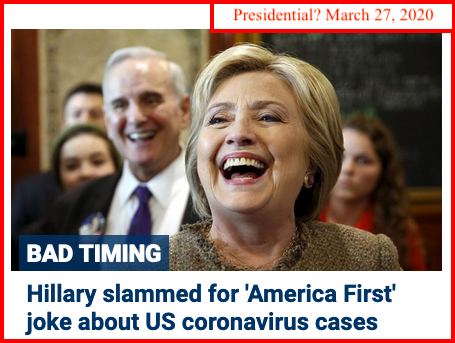 March 17, 2020: the following is making the social media rounds. Name of author unknown but reflects my feelings exactly:


Pay attention folks, there's much more going on here than what meets the eye.

Is it a coincidence that just when the economy is booming, the stock market is setting record highs, we are winning the trade wars, school shootings have stopped, our nation is at peace, the Democratic party is a disaster and so is their likely nominee(Biden). He hasn't a chance in hell & they're not about to let an outsider(Bernie) destroy their scheme. It looks like Trump is a sure bet for reelection after fending off 3 years of investigations and impeachment, then all the sudden world crisis pandemic.

Stock market tumbles, companies are laying off employees, everything is closed and canceled, CEO's of giant companies are resigning and indictments are coming. Now they say there are a couple ways a president doesn't win reelection.

Those are an unpopular war or a poor economy.

But there is something larger going on here driving this sudden outbreak right after Trump beats an impeachment. Especially the fact that it (coronavirus) originated in China who we are in a global trade war with brought on by Trump.

Let's not forget Biden's back door deals with China as well.

China doesn't want 4 more years of Trump either. It all seems rather convenient for the nations and opponents of our current president and economy 5 months before an election.

Couldn't have hit at a more perfect time. With the Democrats running out of campaign talking points in light of no school shootings, no migrant caravans at the southern border, fighting in Syria winding down, North Korea not firing missiles and Trump beating a sham impeachment.

The coronavirus gave them one last "Hail Mary" to try to point fingers at Trump with the clock winding down in 2020. This is almost the perfect fascist playbook. Control the population with fear-mongering and panic, control the media, spread propaganda and the fan-favorite disarm the population.

Sorry but I don't think we are all going to die.

Remember when Ebola was what was going to kill us all, and the media kept showing the piles of body bags that were prepared for the fallout. Then a month later it was totally forgotten.

The common flu has killed more people this year already and the media is SILENT! A handful of deaths out of 320 million Americans and we are in panic tearing down our society and costing our economy billions in the wake.

It all just seems fishy, a little too well-timed if you ask me.

March 17, 2020: Trump will win in a landslide in November if --
March 4, 2020: where we stand --
March 1, 2020: Buttigieg withdraws. Pocahontas says she is maneuvering to win on first vote in a brokered convention. Klobuchar will drop out after Super Tuesday, leaving Bernie, Biden, and Bloomberg. Bloomberg's television ads are comical based on his debate performance, leaving Bernie vs Biden.

February 29, 2020: after votes are in, South Carolina, Tom Steyer withdraws from race.

February 26, 2020: even after this was announced by Rush Limbaugh, this story was hard to find. A special election in Kentucky -- a state congressional seat held for 32 years by a Democrat was won by a Republican. Link here and here.


In every one of these categories, Trump rally metrics show that American support for the president is bigger, stronger, and louder than 2016. Again, these are are metrics from the Trump rallies:

Recipe: Death By A Thousand Cuts


One cup of people from the other party, two teaspoons of independents, a dash of black voters, and you have one hell of a recipe for Democrat Disaster Flambé.

If these statistics are a harbinger of things to come then it’s all over save the fat lady bursting into “God Bless America.”

And that, my friends, is what has the Democrats freaking out.

February 23, 2020: how badly is Bloomberg doing? His first (and only?) cable network interview was with Al Sharpton (MSNBC). Al Sharpton? Are you kidding me?

February 19, 2020: after promising to do so, he now says he will not release his medical records. Bernie?

February 14, 2020: by Super Tuesday, it will be a two-man race: Bernie vs Bloomberg. Bloomberg will be (rightly) accused of buying the nomination. LOL. And that, Bernie, is the way it works in a free market / capitalist system. 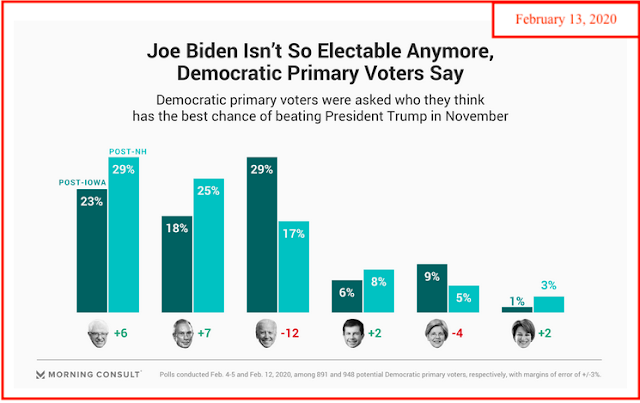 February 12, 2020, 3:22 p.m. CT: on Fox Business, the governor of New Hampshire says it is very, very obvious the Dems will have a brokered convention, three candidates in the left of center lane; and, three candidates in the socialist lane. Down to eight Democrat candidates: Andrew Yang dropped out; Bennett dropped out; and, Deval Patrick suspended his campaign. The "talk" is now changing:
February 12, 2020: Most viable Democrat candidate? Mike Bloomberg. Any rational person would agree that he's the only "reasonable" Democrat candidate. So, how does a Bloomberg-Trump campaign stack up against Hillary-Trump:
February 11, 2020: Joe Biden won't even stick around to thank his supporters in New Hampshire. On the day of the New Hampshire primary, Joe Biden says he is flying to South Carolina even before the New Hampshire votes are tallied.

February 10, 2020: Let it go! Bernie Sanders isn't ready to move past Iowa after Buttigieg declared winner. Buttigieg, for those who have forgotten: mayor of the fourth-largest city in Indiana with a really, really bad civil rights record. But there you have it.

February 9, 2020: the Democrat candidates have two themes: a) "the deplorables"; and, b) get Trump out of office.


I do think that the current Democrat problems began with "the deplorables" speech. Every democrat has continued with that meme -- that anyone voting for any GOP candidate is a deplorable and that message clearly is not working.

Likewise, for about one full year, Steyer only ran ads on getting Trump removed from office. That ad campaign went nowhere. Steyer never got more than 1% of the national polling. He finally changed his theme ("running for president") but he still has not platform, except global warming. For the most part, the Democrat platform is simply "elect anyone who can beat Trump." Bernie might be an exception. 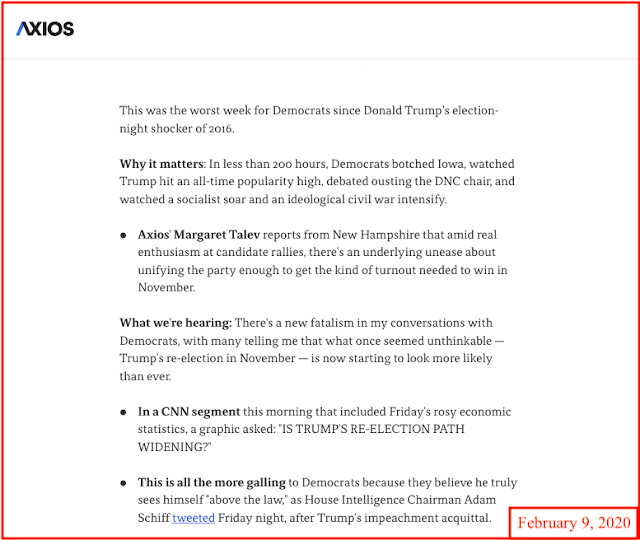