Continuing observations regarding the EIA dashboards:

I was asked yesterday whether the Permian was better than the Bakken. With regard to crude oil, mano a mano (individual well vs individual well): my answer -- impossible to answer. Depends. Depends on what one is measuring. Depends on time frame. But at the moment, I would prefer having mineral interests in a Bakken well than a Permian well. 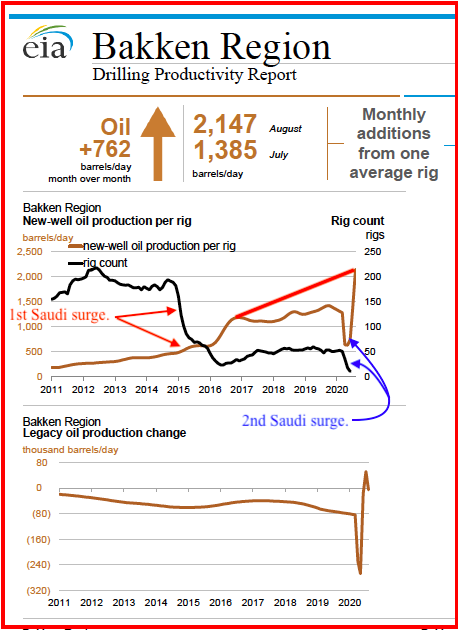 In the Bakken, note how remarkable the August numbers were -- both the production and the fact that the number of rigs remained at an all-time low. Rig counts don't matter. 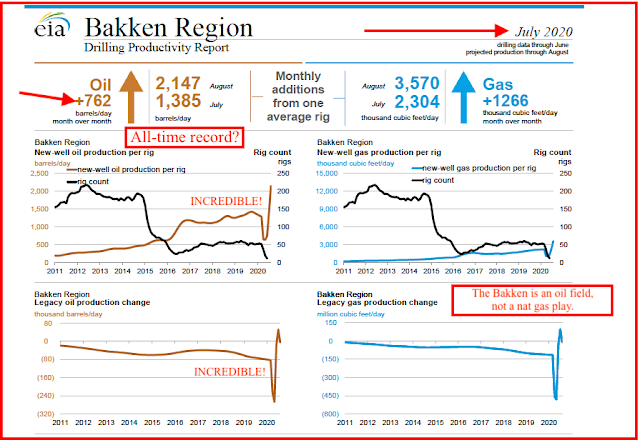 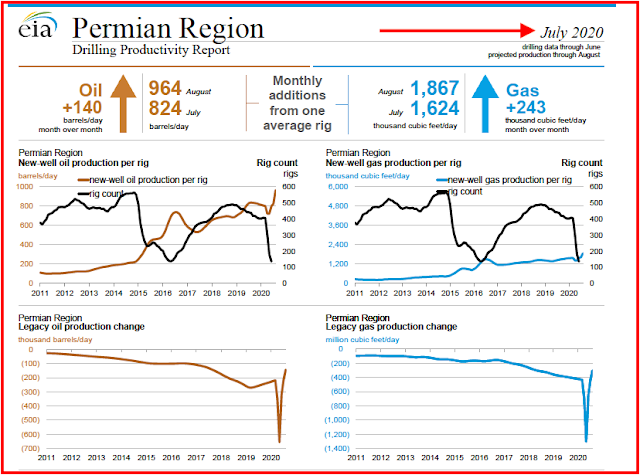 In addition to the notes and commentary above, see the comments at this post from a yesterday:


It's high grading. Going from 50 rigs to ten rigs, means you're only driling the 20% best wells.


I would prefer to say operators (those few who are drilling) are drilling the "best locations," and from there some great wells are being reported.

What interests me is the "parameters" the operators (who are still drilling) are using to determine the "best locations" and what parameters are used to decide whether to drill the middle Bakken or the Three Forks. This, of course, is proprietary (closely hold) information and not known to those outside the decision-making process.

And, although many of us (including myself) get excited to see the rig count increase, in fact, the rig count actually has little impact on total production in the Bakken.

Remember: "almost 100%" of currently drilled wells are DUCs. That "almost 100%" may be on the high side but probably not by much. Of the 67 wells coming off the confidential list so far the quarter, not one had an IP reported (though some did have some production, and in some cases, quite a bit):

One last thought: the decision to add a rig is not made overnight. My hunch is that between the time the decision is made and the rig added could be several months. What did the operators see three months ago that led to an increase of active rigs from ten to thirteen?

I find it quite fascinating.

By the way, keeping track of the operators with active rigs and the number of active rigs employed by each operator, for me, is a leading indicator of what operators think about the future.

Likewise, it would be huge if Whiting shows up with an active rig on the list. Did anyone note that Whiting is reporting a lot of new wells, but has no rigs on the active rig list?

Wow, don't get me started. This is simply so fascinating.