Lyft: in their IPO offering --- "... Lyft has never made a profit and may never make a profit."

Fracking: this is really quite a story. The story was sent to me by a reader. A huge thank you. Great story. From Industry Week, I only wish it were a longer.


This June will mark 10 years of unabated growth for the world’s largest economy. Many factors are attributed to what is soon-to-be America’s longest economic expansion. Rising employment, below average interest rates, and central bank stimulus each get lots of headlines. Forgotten in much of this analysis, however, is the critical contribution from America’s fracking revolution.

It is worth remembering that every major economic downturn in the U.S. for the past five decades was triggered by a significant and prolonged rise in energy prices. The OPEC embargoes of 1973 quadrupled the price of a barrel of oil and a recession followed. The Iranian Revolution of 1979 tripled oil’s price and economic output declined. The Iraqi invasion of Kuwait in 1990 once again tripled energy costs and another recession occurred. And, starting in 2005, oil prices regularly reached new record highs until their apex of $144 per barrel in July 2008. This rise in oil prices was well underway before the meltdown on Wall Street went into hyper-drive and the Great Recession began.

What we have witnessed in the past decade is the complete integration of America’s domestic energy sector into the U.S. and global economies. Led by capitalists, risk takers, and entrepreneurs, America’s energy sector has increased production by an incredible 140% over the past decade. Just last month, U.S. output exceeded more than 12 million barrels of oil per day: something no other nation, including Saudi Arabia or Russia, has ever done. Moreover, American producers can go even higher if they so wish. The era of government- controlled energy cartels is ending. And, it is quickly being replaced by the American way of doing business. Market factors such as innovation, data analysis, capital flows, and workforce development are shaping the present and future of energy much more than the geopolitical forces of the past. America is now the most influential producer of energy in the world. What happens in the fields of West Texas, the Appalachian Basin, and North Dakota is increasingly more important to global energy prices than almost any other single factor. 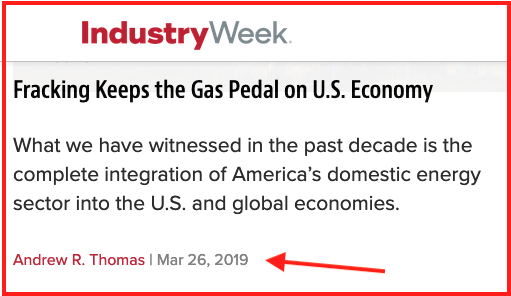