One night only: by Tuesday, midnight, what happened in South Carolina tonight will be forgotten. But wow, Bernie's supporters have to be shaken and stirred. Bloomberg can see the writing on the wall. It's a two-man race and Bloomberg's not in it.

Bat Out Of Hell, Meatloaf

South Carolina: less than one minute after the polls closed in South Carolina, MSNBC declared Joe Biden the winner. Clyburn is still the king-maker in South Carolina. [Later: Jim Carville just said that -- after I posted my note.] Biden got 60% of the black vote in the palmetto state. The questions: how big a spread between Biden/Bernie? Will anyone else get any delegates? Since this is the last state that Biden wins, we still get back to a brokered convention. Which -- by the way -- will there be a convention if coronavirus is still a concern? Hillary? Re-calculating; re-calculating; re-calculating.

South Carolina: the big story? I think this is the biggest story and it is not being reported. Steyer spent his fortune and reputation in South Carolina (and Nevada) and what did he get for all that? Zero, zilch, nada, nil delegates. He will remain a candidate through Super Tuesday, but then it's over. He has three options:
South Carolina: the big story: pollsters. "Everyone" predicted a Biden win but there was some doubt. No one predicted a blow-out. Biden delivered a blow-out.

South Carolina: the big story. Caucuses are dead. Weeks after the Iowa caucuses we still don't really know the final count; forty-eight hours after the Nevada caucuses, less than 100% of the precincts were reporting. South Carolina: within a minute of the polls closing, we had the winner, and no one contesting/questioning the numbers. I bet even Iowans are sick and tired of caucuses. Later: it's not even 10:00 p.m. Central Time and 99% of the South Carolina vote is in. Iowans better never call the South backward again. LOL. 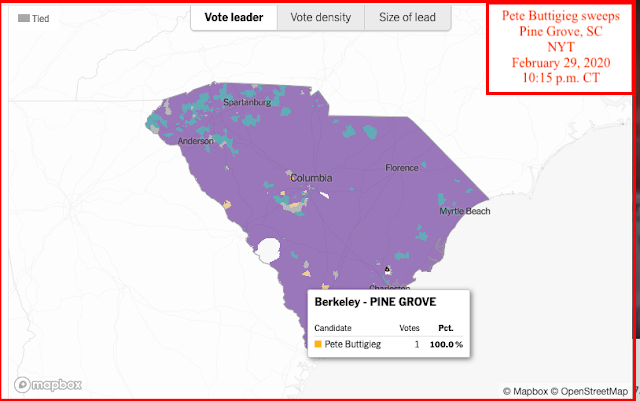 South Carolina: the biggest laugh. After the huge Biden win, some talking heads actually suggested Bloomberg might get out of the race. LOL. Bloomberg doesn't see the race starting until Super Tuesday. At the end of tonight, Bernie will have 62 delegates, Biden will have 52 delegates. The Democrat candidate needs 1,991 delegates. [Later: Rachel Maddow is still suggesting that Bloomberg should drop out before Super Tuesday. Give me a break. That was his plan all along: to start on Super Tuesday. Is Rachel Maddow as smart as people think she is. Is she a closet-Biden supporter?]

South Carolina: of course it's the big political story today, but still, the networks, especially MSNBC seem to be really, really over-playing this story. Fifty-four delegates; one state; a southern state? Give me a break. Other than as a "primary state," is South Carolina even important in a national election? 2012: Trump: 55%; Hillary: 41%.

African-Americans: seem to be getting way too much press. Bernie would say it's the Latino/Latina vote. I would agree.

Right now, with about 53% reporting, Biden may sweep the board; Bernie will barely hit 15%. Biden might win every county in South Carolina, including the college towns.

And finally, the most interesting story to watch Tuesday -- how will Bloomberg do -- remember, he has spent almost $600 million (or maybe more). That's more than a half-billion dollars and he's not been on one ballot yet this primary season.
Posted by Bruce Oksol at 7:37 PM