I mentioned in an earlier post that I thought it was busier in Williston last week than it was when I was last there, April, 2015.

I bring this up because a reader tells me that a long-time resident along US Highway 85 in southwest North Dakota, the southern gateway to the Bakken -- 70 years old, lived there all his life, says that, and I quote: "He has seen more OIL equipment movement in the last 30 days ... not hot and heavy like before, but more stuff then 6 months ago." (Oh, by the way, I always stop at the Belfield truck stop on the east side of the highway when heading toward the Bakken. In April there were no -- or at least so few they did not register -- big trucks at that truck stop. This time, in September, still not very busy, but so much busier than in April.)

Wa-hoo! That was my same impression. It's nice to see I wasn't dreaming. Now, put this in perspective. In April, folks are just coming out of hibernation in North Dakota (except in Fargo where they need to keep the roads open for Minnesotans year 'round). September is still summer -- or at least what passes for summer -- in North Dakota, and so the activity should be greater. But a long-time resident, 70 years old, would subconsciously take that into consideration.

Some observations: no one sees any 18-wheelers in the Bakken any more. The big rigs are rarer than sage grouse. To some extent that reflects less drilling and much, much less fracking activity. However, much more fluid is being moved by rail and pipeline and thus naturally truck traffic would be much, much less. In addition, the four-lane bypasses around Watford City, Alexander, and Williston have dispersed the big rigs. In addition, it is impossible to even begin to articulate how many big trucks have been taken off the road because of the huge new rail yard east of Williston. It would be fun to have been able to compare this rail yard to the Port of North Dakota in Minot. I guess it's called North Dakota Port Services now. It looks like the Williston rail yard is bigger than the NDPS in terms of miles of rail siding, but the NDPS is co-located with the BNSF Gavin yard.

But when driving downtown Williston it is a steady stream of vehicles. And driving up from Rapid City to Williston, I saw a lot of big rigs taking oil equipment up north. 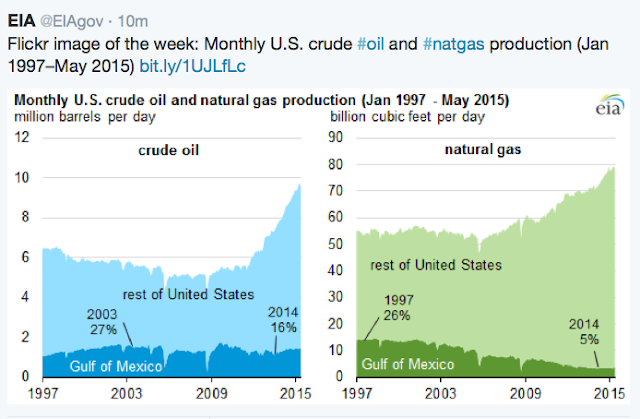 But notice, also, the decline from the Gulf of Mexico, in terms of percentage.


September 30, 2015: maybe it wasn't criminal, after all. WSJ  is reporting: automakers may have been exempt under Clean Air Act.

This is so cool. CNN Money is reporting:


Diesel cars from Volkswagen and Audi cheated on clean air rules by including software that made the cars' emissions look cleaner than they actually were, according to federal and California regulators.

The regulators say that the software on the cars turns on emission controls only when it detects that the car was being tested.

Aren't these German? The country that is so concerned about the environment? The hypocrisy. Shocking!

The question is whether the law required that emission controls be turned on whenever the car was in operation. I doubt the law was that specific.

I wonder if Volkswagen and Audi will be subject to the same fine levied on GM for killing hundreds of people due to a faulty ignition switch, of which GM was aware.

Later, such an incredible understatement: " "I personally am deeply sorry that we have broken the trust of our customers and the public," Volkswagen CEO Martin Winterkorn said in a statement." He needs to resign immediately; if he were Japanese ...

The Wall Street Journal is reporting that Putin has moved tactical jets into Syria. Their mission, my hunch: shoot down drones -- target practice. They certainly wouldn't be doing this because they are at war with anyone, but it offers them a really, really good opportunity for target practice.

Defense officials said at least four tactical fighter jets had arrived at the rapidly expanding airfield on the Syrian coast south of Latakia. Over the past two weeks, defense officials said, Russia has dramatically stepped up development of the airfield by sending in housing for up to 2,000 people, attack helicopters, choppers to transport troops around the country, and artillery.

The arrival of the jet fighters is the most concerning development for the U.S., which regularly flies surveillance flights and airstrikes against Islamic State forces in Syria.

If George W. Bush were president, The New York Times would be comparing the movement of Russian tactical fighters into Syria no different than Russian moving nuclear missiles into Cuba during the "Cuban missile crisis." But he's not, and they won't.

With the Crimean and the Ukraine behind him, Putin probably feels it's time to move further south. Europe is pre-occupied; NATO is in disarray; and President Obama is padding his resume for a second Nobel peace prize.
Posted by Bruce Oksol at 1:10 PM