From Rigzone, shale has "de-linked" pricing for natural gas and crude oil:


The diversion between oil and gas prices came in 2008-2009. This is right when the U.S. shale oil and gas revolution took off, when the deployment of hydraulic fracturing and horizontal drilling technologies became widespread. So just looking over this century, there have really been two distinct periods for oil and gas: the “pre-shale era” (2000-2008) and the “shale era” (2009-present).

Talk about coincidental. Saturday my son-in-law and I were discussing exactly that. I pointed out that crude oil is international in scope whereas natural gas is much more regional. Natural gas can be transported long distances, but like crude oil that comes at a cost, and .... well, here is Rigzone again --


This is all noteworthy because both U.S. oil and gas production have boomed since 2009. Domestic crude output has risen 150 percent, with gas up 60 percent. The vital difference between these two commodities, however, is that oil is easily transportable and therefore sold on an immense international market with linked prices. For oil consuming nations, outside forces and decisions reverberate around the world. The U.S. shale oil boom is simply not able to shelter the domestic market like shale gas has. Gas remains a regional product with distinct markets: over 70 percent of the world’s oil usage is internationally traded, versus just 30 percent for gas.

I also mentioned to my son-in-law that I could not imagine the price of natural gas dropping any further. But here is Rigzone again:


Looking forward, higher oil prices will generally mean lower U.S. gas prices. That is because of the Permian basin in West Texas, the largest oil field in the world. Higher prices will lead to more oil drilling and more associated gas supply. To illustrate, despite not having a single gas-directed rig in 16 months, the Permian now accounts for almost 20 percent of U.S. gas output. In the reverse, lower oil prices can lift gas prices by lowering gas production. The reality is that gas remains a secondary resource to oil, and its market is just too small to have a material impact on oil prices.

I don't think the Bakken has ever had a single gas-directed rig and look at the amount of natural gas being produced in North Dakota: over 3 billion cfpd.

By the way, despite the stellar US jobs report last week, there was one very disheartening note:


The U.S. saw a sharp decline in support activities for mining in November, according to data released Friday from the U.S. Bureau of Labor Statistics (BLS).

Speaking of which, I forgot to post the most recent natural gas fill data: 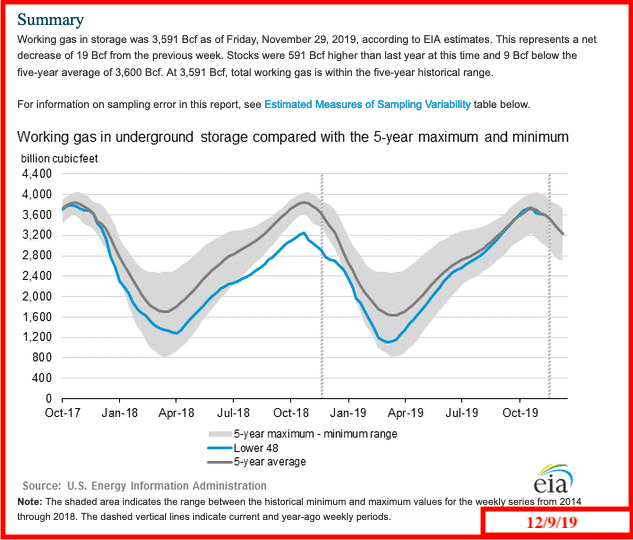