Disclaimer: this is not an investment site. Do not make any investment, financial, job, travel, or relationship decisions based on what you read her or think you may have read here.

DNR: will report in the a.m. before market opens; expectations: 9 cents/share.

How relevant is OPEC? Headlines that all-out war in the Mideast was about to break out and oil hardly moved. Tea leaves suggest Russia will maintain reduced production or even cut a bit more.

Leaked? One has to ask why? When we "played" war games at Air War College, we "gamed" intelligence "leaks" to the press. This leak? I think it's to let Iran know that "we" know what they are "thinking." Maybe that will be enough to make them "think twice." From The WSJ this evening --


Unusually specific intelligence reports about fresh Iranian threats to American forces in the Middle East triggered a request by the U.S. military command in the region for additional assistance as a deterrent against possible aggression. 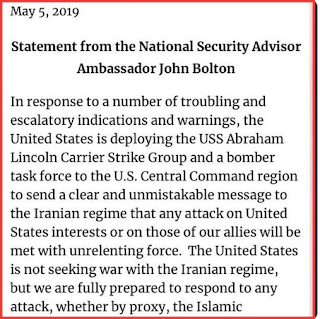 Military uniform: see this article on the new US Army uniform. This is what caught my eye:
the Army plans to roll out the new uniforms to all soldiers starting in 2020. Soldiers will even be given the option to buy a retro-styled leather bomber jacket to go with the uniform. The US Air Force did that several years ago but the jackets were only authorized for a subset of officers. It's possible the Air Force bomber/fighter jacket program has been expanded. So many great memories.

Interest rates: by the way, did you all see interest rates fell today? Exactly what Trump has been asking for .... and the Fed won't help out. More than one way to skin a cat, as they say.
Posted by Bruce Oksol at 9:27 PM