Later, 9:27 p.m. Central Time: does anyone really read this stuff? Is anyone at CNN even editing this stuff. TSLA plunges nearly 11% at the opening this morning on incredibly bad "sales" report. By the end of the day, it had recovered a bit, closing down "only" 7%. But look how CNN reports it: saying that the very disappointing sales figures "did not come as a shock." LOL. Imagine how far Tesls would have fallen had the sales data been a surprise. LOL. Link here:

Tesla US delivery data for March, 2019. Link here.
So, for the US, a good month. I'm seeing a lot more Teslas in the Southlake, Texas, area. I can count on (no pun intended) that I will see at least three Teslas each day while driving the granddaughters to school and their various extracurricular activities. Almost all of them are sedans; I seldom see a Model X.

Everything below was previously posted.

So, how is the BIG STORY of the day playing out? Tesla's first quarter deliveries plummet! I assume those folks who bought at the close yesterday wished they had to waited until this morning to buy. Whatever. 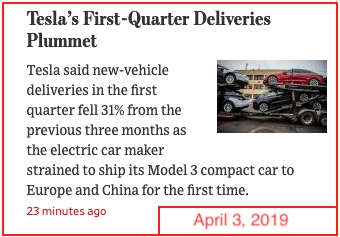