August 24, 2019: I've seen the "R" in permits mean different things to different folks, to include, "revised" and "re-enter." In this case the Sophia Drake was never spud, and the Amber Renee was a great well until it was taken off line. Now, the Sophia Drake (with a slightly new name, and a new permit) will be drilled; and, a "different" / "new" Amber Renee will be drilled, see graphic: 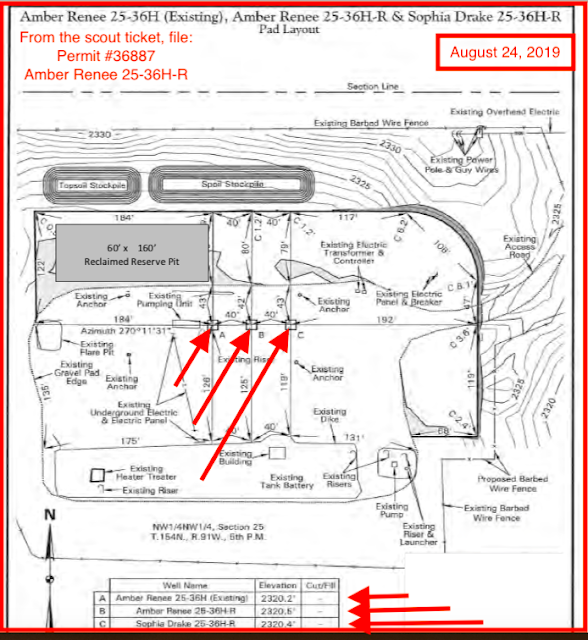 
Original Post
With a long post like this, there may be factual and typographical errors. If this information is important to you, go to the source.

I don't own any minerals in the Bakken. One well means nothing more to me than any other well except for the specifics about the well. But I do have to say that there are a few wells in the Bakken, that for whatever reason, "stick out" for me. The "Amber Renee" well is one such well.

First, I like the name. Amber Renee. A perfect name for a young woman and/or a Bakken well. On the other hand, not a good name for a Kentucky Derby thoroughbred. For the latter, a better name, Runstowin.

Second, the Amber Renee got my attention when after producing about 800,000 bbls of oil, the operator shut it down. That gets my attention.

But now this. In the December 3, 2014, daily activity report, Murex has indicated that it wants to re-enter the well:

When you look at the scout ticket below, note:

As noted above, I've enjoyed following this well. Here are the previous posts regarding this well:


In the Sanish, Murex has taken the Amber Renee off-line (as of January, 2014). It is now listed as "inactive." Could it be related to activity planned for the Jacob Daniel well south of the Amber Renee? Right now I don't see any other activity on the GIS map server.

[For some background to Murex, a reader noted that the company was featured in a Forum article some years ago. I remember that article and have it linked elsewhere on the blog. Here is the original story.]


The Amber Renee well was completed/tested almost exactly three years ago. It has produced about 750,000 bbls in those three years. It is still producing about 10,000 bbls/month, and is not on a pump (based on the scout ticket)
This well is considered a "long lateral" but, in fact, is quite short, barely extending in to the second section;  the Chandler James is in the same section, running parallel to Amber Renee, but is a "full" long lateral. 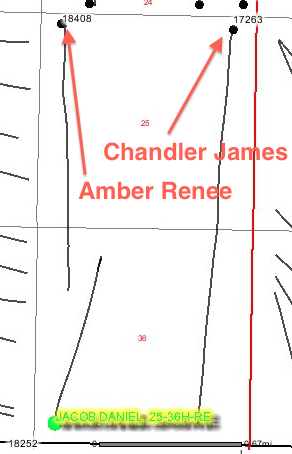 The scout ticket with the production profile only since March, 2013:

But there is more to the story. Below is the production profile of the Jacob Daniel well in late, 2009, through late, 2010 (see if you spot the obvious).

The Jacob Daniel (during the period the Amber Renee was fracked):

For the rest of the discussion, I am going to assume that:
With those assumptions, there are two observations resulting in two conclusions (one "firm" and one "maybe, but it's a stretch."

The first observation and first conclusion: Note that the Amber Renee was fracked in February. The horizontal to the south (Jacob Daniel), coming close to the Amber Renee, was taken off-line during that time period. When it came back on line, its production jumped significantly, from 5,000 bbls/month to 9,000 bbls/month. If the assumptions are correct, it's hard not to conclude that fracking the Amber Renee did not affect the Jacob Daniel, at least for a short period of time (double negatives, but I think you understand what I'm trying to say).

Interestingly enough, there was a jump in the following month, the month that the Amber Renee was fracked. The Chandler James went from 18.4K in January, 2010, to 20.8K in February, and and an even bigger increase the following month to 21.4K before starting to taper.

If the assumptions are correct, it's hard to argue that fracking the Amber Renee had not effect on the Chandler James.

The second conclusion: "maybe, but I think it's a stretch." The two parallel horizontals are so far away it's hard to believe fracking the one had an effect on the other. So, I won't argue with folks who suggest that my assumptions are wrong, or that it's simply an anomaly, a not unusual variation in monthly production in the oil patch. But it is interesting.

By the way, this whole discussion has huge implications if the slump in the price of oil persists for two years.
Posted by Bruce Oksol at 5:41 PM