Disclaimer: in a long note like this and with so many numbers, and no triple-checking and no NYT fact-checker, there will be factual and typographical errors.

July 2, 2018: with regard to DUCs, my thesis is that shale operators are using DUCs to manage their assets. Someone suggested the reason there are so many DUCs is because of limited takeaway capacity. I was thinking the same thing. Then I read this from last week (the article is a keeper; it's been archived).


“The indicator that I typically watch, the Brent Oil price minus the WTI price, that spread was just over $10,” Kringstad said. “When that price is higher than $5 per barrel, historically the industry tends to pull barrels off the pipeline systems and put them on the rail network to take advantage of that market situation.”

And more from the article:

Some of that shift is a result of oversupply in Cushing, Oklahoma, Kringstad said. Permian oil is congesting that market hub, lowering prices. Oil that can go to east and west coast refineries is thus finding better prices there.

Long-term forecasts for North Dakota oil production by the mid-2030s is for between 2 and 2.4 million barrels of oil per day, about double of what it is now, Kringstad said.

“When we look at the takeaway capacity options, it’s right around 1.4 million bpd with what is now in service or slated to come online in the next several years, so there is potentially a 600,000 to one million barrel per day potential shortfall long term,” he said.

Bottom lines:
Bottom, bottom line: with regard to DUCs, there's something going on that isn't explained in the data. Time will tell. As it always does.

Note: the number of DUCs (drilled to depth but waiting for completion) and inactive well numbers (AB and IA) are all estimates, although the number of DUCs should be a fairly accurate number. In addition, it depends on the exact day that the data is collected.

I will post graphics first to bring us up to 2016 or so. These graphics were taken from various sources using a google search. 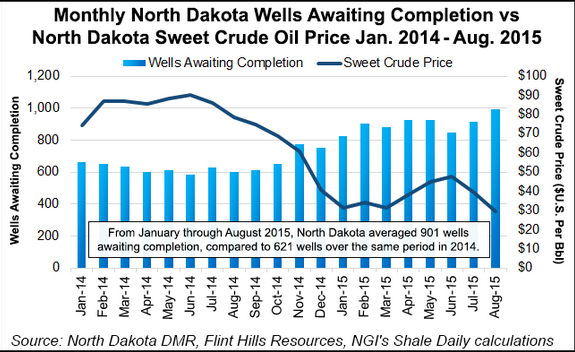 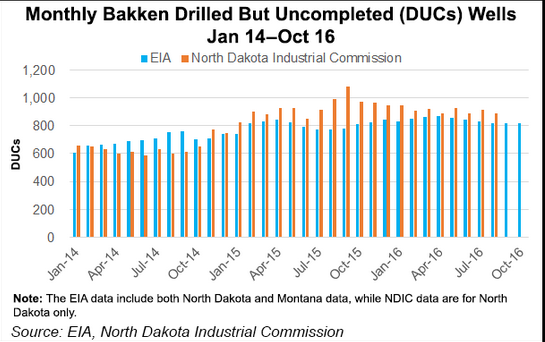 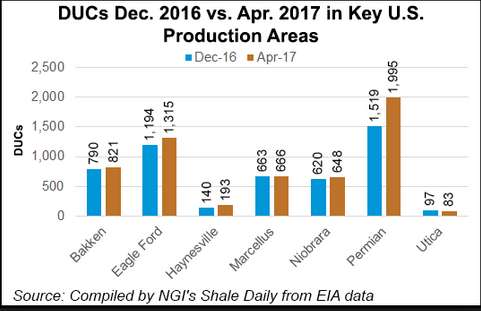 Disclaimer: in a long note like this and with so many numbers, and no triple-checking and no NYT fact-checker, there will be factual and typographical errors.
Posted by Bruce Oksol at 11:49 AM