I'll replace this with a better video later, but for now this will have to do.


Incredible race. Brad Keselowski "steals" another one. But well deserved. Chase Elliott / Joey Logano tangle with three to go -- Brad saw it coming. Took advantage. Incredible race. But Jeff Gordon, up in the booth. Wow, he's good. He may be the best sports commentator out there right now. I'm not a Keselowski fan but I'm warming up to him after races like this. Bristol, Tennessee.

Notorious, Alfred Hitchcock. Three times in 48 hours. The movie itself, then the movie with commentary, and then the movie again, this time with a second commentary. Yeah, it's that good. Tonight, Grand Budapest Hotel. Interesting back story.

Preparing the chicken for the grill. Video by Sophia. I normally don't use a "stand" for beer can chicken -- I prefer to set up the chicken without the stand but tonight just wanted to keep it simple. I had too many things to do. 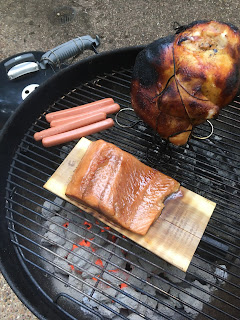 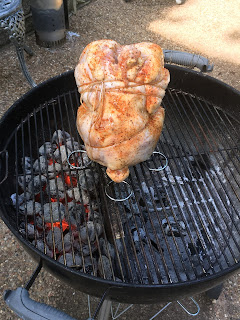 Saudi Arabia foreign exchange reserves tumble 5% month over month; down almost 40% from a year ago. Enough "cash in the bank" to pay for 43 months of imports. Link here.