More Trump jobs: General Motors plans at least $1 billion in fresh US investment; expected to create more than 1,000 jobs. Over at The Wall Street Journal:


General Motors Co. this week will announce plans to invest at least $1 billion across several U.S. factories, two people familiar with the plan said, a move aimed at underlining its commitment to U.S. manufacturing jobs in the wake of President-elect Donald Trump’s criticism of the auto maker’s imports from Mexico.

GM’s announcement could come as early as Tuesday, the people briefed on the plan said. The company will cite a number of new jobs in excess of 1,000 stemming from the investment but doesn’t plan to specify which of its factories are in line for more work, one person said.

The move comes days after Mr. Trump publicly ratcheted up pressure on the nation’s largest auto maker. During his press conference last week, the president-elect thanked Ford Motor Co. and Fiat Chrysler Automobiles for recently announced U.S. investment plans that are expected to create a combined 2,700 jobs. He then turned up the heat on GM to follow suit. 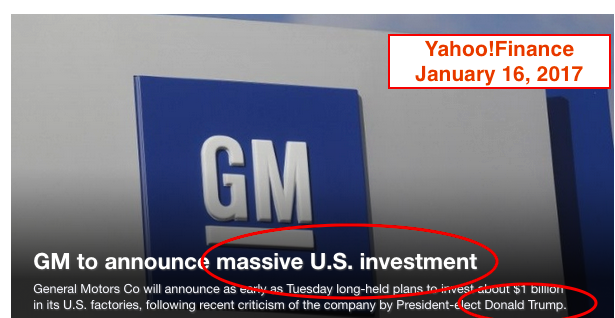 Skiing competition canceled: too much snow. Ski World Cup in Switzerland called off. I can't make this stuff up.

How Can You Mend A Broken Heart, The Bee Gees

And what a great week to go downtown:

Mine should be arriving in less than two weeks. Is the new card worth it? Let's see what MarketWatch had to say:

Gasoline purchases:
Gift card:
Capital One "What's In Your Wallet?" may be the best competitor: 1.5% for all purchases and a $100 bonus when signing up.

MarketWatch says American Express's Blue Cash Preferred card offers 6% at US supermarkets; 3% at gas stations; and 1% on other purchases. Surprisingly, AMEX has no annual fee on this card.

The big winner: Chase. The bank/card "will attract high-spending, low-risk customers who will use them responsibly."

The bigger winner: Amazon. It's a "rewards" card; not a cash-back card.

But money if fungible, and "rewards vs cash-back" won't matter. Amazon is more than just books.