It's going to be a busy, busy day. The market is up big, which means there must be a lot of news to cover. Headline: GM, CAT earnings drive stocks higher as "biggest day of 2014" gets underway." Apparently CAT "brightens outlook."

This is not an investment site. Do not make any investment, financial, or relationship decisions based on anything you read here or think you may have read here.


The four new wells had an average horizontal lateral length of approximately 4,475 feet. Continental expects estimated ultimate recovery (EUR) of 940,000 gross Boe per well in the oil fairway of the play for a well with a 4,500-foot lateral section. In November 2014 , Continental plans to commence drilling its first extended lateral well in the Springer play, with a planned lateral length of 7,500 feet. The Company expects an average EUR of approximately 1.6 million gross Boe for extended lateral wells of this length, reflecting the 67% longer lateral. Continental reported that the average completed well cost this year has been in line with earlier projected cost of $9.7 million per well. The four newest wells were drilled to an average vertical depth of approximately 12,625 feet and average total measured depth of approximately 17,650 feet.

The UPI talks about the SCOOP here.

All I can say is "strange," to say the least.

Oh, and this concluding remark from the linked article, in bold: "The labor market is still strong an any slack remaining is just a figment of the Federal Reserve's imagination." I wonder what color the sky is in their universe?

RBN Energy: first in a series on diluent for West.


Demand for diluent range light hydrocarbon materials such as natural gasoline and condensate that are used to reduce the viscosity of heavy Canadian bitumen crude so that it can flow in pipelines, is forecast to increase from 380 Mb/d in 2014 to 685 Mb/d by 2019.

New large scale bitumen projects in Alberta requires two pipelines – one to ship crude production to market and one to ship in diluent for blending. Today we start a new series detailing the expanding western Canadian diluent distribution network.

RBN has frequently detailed the challenges that producers in the Western Canadian sedimentary basin (WCSB) have faced transporting heavy bitumen crude from the Alberta oil sands formations to market.

Bitumen crude that is not first upgraded by partial refining (to make light synthetic crude oil or SCO) cannot flow in pipelines unless it is diluted by blending with as much as 30 percent of lighter hydrocarbons (known as diluent) or heated up. Heating is used infrequently for short distances but diluent blending is the preferred method for most Canadian producers that ship such heavy crude by pipeline.  Our analysis to date has mostly focused on the longest part of the bitumen crude journey – from pipeline hubs in Edmonton and Hardisty to refineries in the U.S. Midwest and on the Gulf Coast.

Update: The quote is theirs, not mine.

This is what I'm watching: the gap. I lose track of things but it is my impression that things got a bit out of hand last winter when the northeast almost ran out of natural gas. I'm looking at "Last Year" and then comparing "The Gap" going into this year. If it's a mild winter, no big deal. If it's a severe winter, it appears to me, we are entering the season with a relative deficit compared to previous years (5-year historical averages).  I am new to the world of natural gas, and I'm certainly new to the world of natural gas in the northeast, so I am learning as I go along. I find this quite fascinating to be able to watch this play out in "real time." 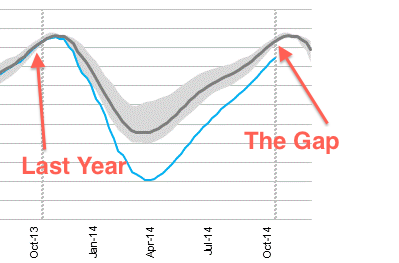