A Reader Comments On Covid-19: The Experiences Of The Dakotas Vs New Mexico -- Juneteenth, 2021

From a reader with minimal editing:

Remember, South Dakota's Governor Noem was the only governor who enacted no COVID mandates - none.  People said that the Sturgis biker rally was going to bring about an apocalypse.  They were wrong.  Actually, dead wrong.
Look at how well South Dakota fared - no masks, no quarantines, no shelter-at- home, no business closures, no silly spacing, nada, nothing, zilch.  [Well, she did close public school classrooms from mid March thru the end of May.  But only two states (Montana and Wyoming) were willing to NOT deprive kids of classroom education and reopened their classrooms in early May 2020.]
...........
Contrast that with the governor of New Mexico who shut down everything she could and frightened people into the most illogical lifestyles.
...........
A new report from Emily Burns at The Smile Project places New Mexico 7th-worst overall. The data used are below and include death rates, unemployment, and lost schooling. There are other ways to rate overall COVID performance, but the chart below does a solid job.
By those standards, New Mexico’s governor is hardly doing a good job on COVID 19. 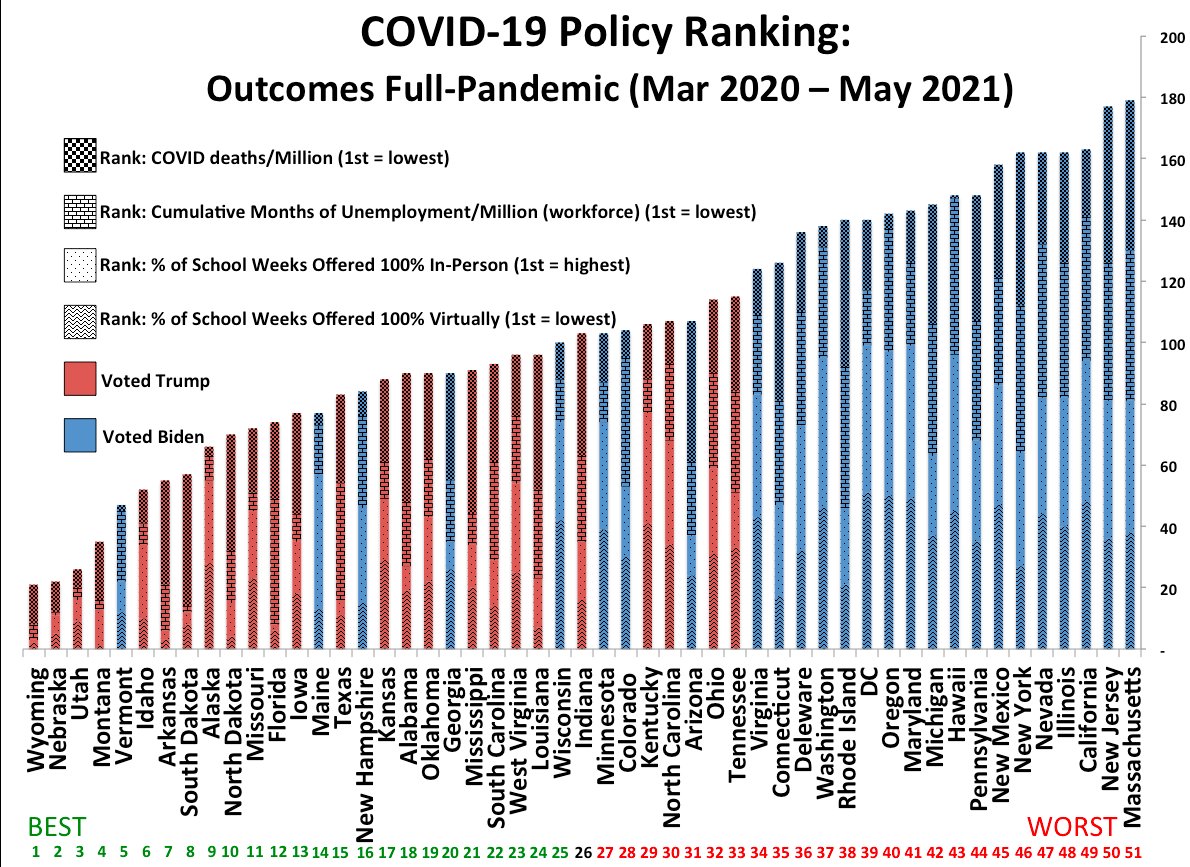 Another comparison that fascinates me is the North-Dakota-to-South-Dakota comparison.

Start with the fact they both states are very similar: climate, lifestyle, nature AND nurture.

South Dakota's Governor Noem took a courageous stand.  North Dakota's Burgum isn't as tough, so he enacted a lot of the restrictions promulgated by 'science".  Shouldn't there have been a lot more difference?  Actually, since ND was "safer", shouldn't the results have been reversed? Both states did almost as equally well, but the "less safe" state with the Sturgic rally was 8th best in the country. North Dakota came in tenth, but still incredibly respectable.

..............
The two states which kicked kids off their home computers and made them go back to school in early May (Montana and Wyoming) didn't listen to the national teachers' union, did they?  And look how well their populations fared.

Remember, these numbers are adjusted to statistics per million, so it's not just because they're thinly populated ... Again NM is quite thinly populated, but the governor's policies sure ruined any advantage that would have given that state.