Also for the archives, from the EIA. Compare these numbers with the numbers that were being bandied about by the blog back when the Bakken boom was hitting its stride: 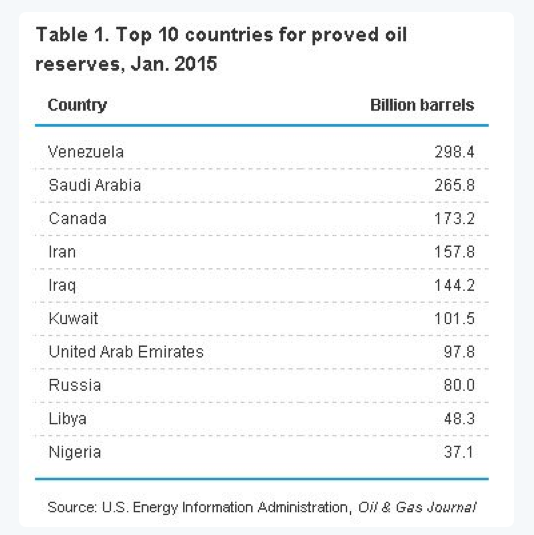 Just for the fun of it, total the reserves of the top ten countries in the graphic above.

Now divide that number by 365, the number of years in a day.

I came across the following; it reminded me of the "fallout" from the natural gas well in southern California that had been leaking methane for the past four months, until it was finally capped this past week.

From introductory notes to The New Yorker's The 50s: The Story of a Decade, pages 4 - 5:


"Fallout," by Daniel Lang, tells the story of an H-bomb code-named Shrimp. Shrimp was detonated by the United States on Bikini Atoll on March 1, 1954, and, as Lang observes, it was "the shot that made the world fallout-conscious."

Calculations performed at Los Alamos had predicted Shrimp would have a yield of five megatons. Instead the yield turned out to be three times as great. The firing crew was stationed in a concrete bunker on Enyu, an island twenty miles from the test site. A few seconds after the blast, the bunker started to shake, one of the men later recalled, as if "it was resting on a bowl of jelly." The explosion pulverized billions of pounds of coral reef and seafloor; much of this debris was sucked into the atmosphere by the rising fireball. When the radioactive dust settled, some of it fell on a Japanese fishing vessel, inaptly named Lucky Dragon, and some floated down on the residents of Rongelap, a tiny speck in the Marshall Islands. The crew members of the Lucky Dragon arrived back at port nauseated, feverish, and covered with blisters. The Rongelap Islanders suffered radiation burns and their hair fell out.

The title of "Fallout' refers both to the radioactive dust and to the awkward situation it created for the US government. Lang's piece appeared more than a year after the "shot," and the Atomic Energy Commission was still trying to allay public fears The AEC's scientists pooh-poohed the burns and the hair loss and treated the Rongelap Islanders' forced evacuation as a sort of extended vacation. Lang seems, in large part, to accept the official line; for instance, he notes that the exiled Rongelapers ahve "been shown their first Wild West motion pictures, which they think are terrific." But doubt creeps in, anyway. The Second World War is a decade in the past, the Gulf of Tonkin Resolution a decade into the future, and Lang, in 1955, seems to be positioned, uncomfortably, in the middle. Reading "Fallout," you sense a writer holding back, and the world rushing forward.

I may come back to this. Confusion reigned. Judge makes decision over the phone. I see the possibility of a grand deal here. Loretta Lynch agrees to indict Hillary in exchange for a promise to be nominated by Obama for Supreme Court justice to replace Mr Scalia.

Will Loretta Lynch stand by her man?

I can't remember if I've posted this. I came across this during my trip back to the Bakken. My favorite "part" of the video may be the drummer. I think this is worthy of a  Leonard Cohen comparison.