Two data points in this post. Looking at three countries, it appears that France and the UK are in real trouble, again. This is being reported in the news for France; I decided to look for myself. Link here. 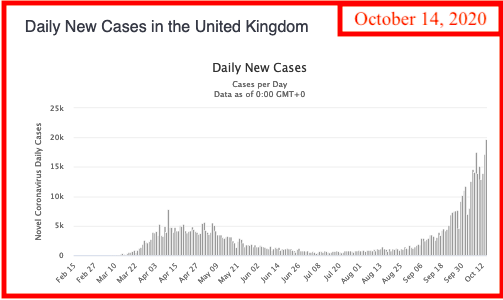 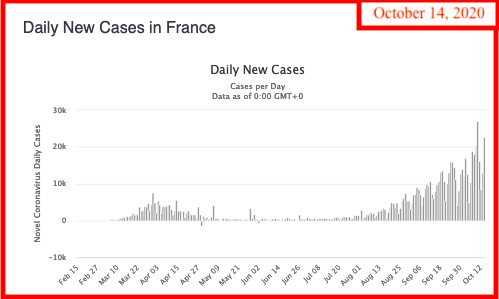 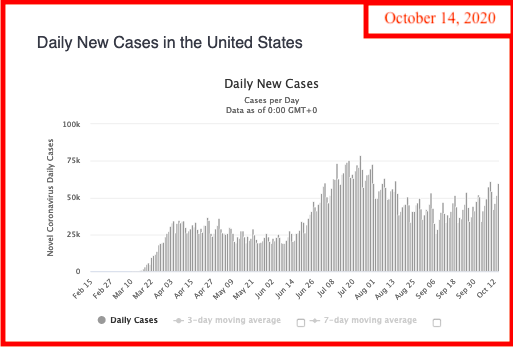 The "problem" is not yet showing up in the death rate. Time will tell. Give it a month.

Now, the second data point / second issue that needs to be discussed. I picked up on this yesterday when some breathless reporter said that the US has now recorded eight million cases of Chinese flu.

Eight million cases. Over eight months. You can do the math.

I can't put my hand around eight million of anything. Although I soon may if the stock market keeps going up the way it's been going up. LOL.

But seriously. What does eight million mean?

Quick! What's the population of the US? Let's say 330 million. I think the official figure is around 330 million but pick your own number (between 300 and 400 million). The higher the number you pick the worse this will turn out to be.

That's it. After eight months, less than 3% of all Americans have been "officially" diagnosed with Chinese flu. And the diagnosis, based on anecdotal reports, is incredibly liberal. If you cough and can say you knew a man....your physician will give you a "Chinese flu" diagnosis.

Some folks say the diagnosis is way too liberal (as noted); others say we are missing many, many cases. The WHO says they assume 10% of the entire global population has "had" the disease. But for the US, it's probably a "wash" between the "high" side and the "low" side.

If so, after eight months, about 2.4% of all Americans have been diagnosed with Chinese flu.

Does the media ever talk about that? Knowing that the vaccine is at least two years away despite what "everyone" is telling us -- I'm talking about a universally accepted, affordable, and 100% accessible vaccine.

Hairdressers, restaurant owners, airlines, universities, theme parks, et al, better hope like hell that Hiden' Biden is not our next president with Dr Faust as the surgeon general with Kash 'n Karry as the Fed Chairman. All three are clearly on record that the US needs to be locked down for at least another six weeks, or was it six months, and this time, really locked down.

Eight million Americans. When we get to sixteen million that will be (16/330) just under 5% of the total US population.

Herd immunity: at least 65% need to have been infected; and I believe the "official" number is closer to 70%.

By the way, this helps explain why Disney made the announcement the other day that "streaming" is their future. Disney has seen the writing on the wall and it's not pretty. Cruises, movie theaters, and theme parks are not in Disney's future.

Eight million cases in the US.

Seasonal flu? According to the CDC:

While the impact of flu varies, it places a substantial burden on the health of people in the United States each year. CDC estimates that influenza has resulted in between 9 million – 45 million illnesses, between 140,000 – 810,000 hospitalizations and between 12,000 – 61,000 deaths annually since 2010.

Nine million to 45 million season flu cases every year.  And that's with a vaccine that's about 45% effective.