Original Post
I'm re-posting this. I posted it earlier today as part of an earlier post but the more I thought about it, the more I realized it needed to be a stand-alone post. This really is quite amazing. Look at the degree to which Saudi Arabia increased its drilling ... and yet, production hardly moved at all. There are several obvious story lines here, but they are so obvious, it would be tedious to point them out.
*******************************
The Red Queen Effect

Correct me if I'm wrong, but I believe Saudi's crude oil production has remained fairly stable over the past several years.

The EIA data suggests there has been almost no increase in Saudi oil production since 2011. Remember: 2008 and 2009 -- global recession and oil production decreased in response to that, but since 2011, not much of an increase:

Yes, I know the graphic only goes to 2014, but that was the newest one I found. More recent data suggests overall crude oil production has not increased all that much since then.

Now compare that graphic with the graphic John Kemp tweeted today showing how many rigs Saudi Arabia has added since 2011. Almost a quadrupling, or maybe even more than a quadrupling -- it's hard to tell from the graph, and the data from Saudi Arabia is probably somewhat suspect to begin with. Whatever. 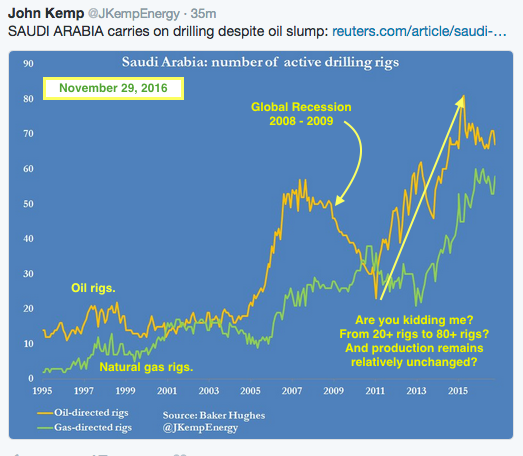 One can quibble about the degree to which Saudi Arabia has increased its crude oil production since 2011, but it's pretty easy to see the growth in the number of active rigs Saudi Arabia has had to employ to do that. It appears that there were 20+ active rigs in 2011 and by 2014 there were upwards of 60+ rigs; now there are upwards of 80+ rigs. Whatever CAPEX was for 20 rigs in 2011, I assume the Saudis are spending more money to operate 80+ rigs.

In that same time period, North Dakota has gone from 200 active rigs to about 35 active rigs.
Posted by Bruce Oksol at 7:44 PM