Reminder: great camera deal at Costco expires today. Canon EOS T6 vs Nikon 3400. There's some suggestion that smartphone cameras are driving DSLR cameras. Counterintuitive. Acer 14" Chromebook has price drop of $99 -- now about $199. I understand from some of my readers that the Chromebook is the "standard" out in California for many elementary, middle, maybe high school students. What a great country.

Biggest story of the week not being reported: Prince Salman was supposed to be crowned king this week; haven't heard a thing.

WTI: if it holds, we could have a huge day in the oil sector. WTI briefly hits $58/bbl -- something not seen since 2015. This "jump" in the price of oil may be function of lack of heavy oil for refiners: Keystone's northern leg is shut down due to leak in South Dakota; Venezuela may cut deliveries to US.


OPEC has an Iraq problem: the group’s second-biggest exporter is lurching between quota busting and production-crimping crisis, clouding the policy-making picture as ministers decide how long they need to extend output curbs.

Exports from Iraq’s northern fields plunged by about 40 percent in the first half of November after clashes between the federal army and fighters from the semi-autonomous Kurdish region disrupted fields in the disputed Kirkuk province. After consistently exceeding its output quota all year, Iraqi production dropped in October when the fighting started.

The Organization of Petroleum Exporting Countries, due to meet next week in Vienna, is already grappling with volatile production in Nigeria and Libya, and Iraq adds another layer of unpredictability. For policy makers, the short-term disruption risks masking a longer-term truth: Iraq, which only got a production quota last year after decades of exemptions, has never felt comfortable with constraints and wants to maximize the country’s potential output.

Newcomer's guide to oil and gas; a new series being introduced at Rigzone.


RBN Energy: the changing economics of power generation in Texas.

Market economics, and to some degree federal environmental rules, have been forcing U.S. power generators to rejigger their fleet of generation plants for some time now. It’s not unusual for utilities to retire older, less efficient plants and bring on new, more efficient and economical plants as better technologies becomes available. But in the past decade, that turnover kicked into overdrive as the Shale Revolution dramatically increased the availability and reduced cost of one of the primary fuels used to generate power — natural gas. Lower-48 gas production has surged from around 50 Bcf/d 10 years ago to more than 70 Bcf/d now, while national average spot gas prices have dropped from upwards of $5.00/MMBtu prior to 2010 to $2-3/MMBtu in recent years. This has happened at the expense of another major generation fuel — coal.

That’s because utilities practice economic dispatch — firing up the least expensive units first and the most expensive units last — with the economics being highly sensitive to the variable cost of the resource required to run the plant. We’ve discussed this in previous blogs on the topic -- but, in short, baseload generation — the minimum required by the grid around the clock — is served by the consistently least expensive, most reliable generators, which is usually nuclear plants. Traditionally, the next-cheapest power after nukes has come from coal-fired plants, followed by natural gas. But as gas supply surged and gas prices fell, economics began to favor gas over coal and prompted utilities to use a lot more of their existing gas-fired power generating units as well as to build more gas-fired generation capacity. Coal prices fell too, in response to the stiffer competition from gas. But because of regulatory pressures to burn lower-emission fuels, lower coal prices were not enough to prevent a lot of coal-to-gas switching in the power sector. Moreover, the lower price environment in some cases led to coal producers either temporarily or permanently shutting down mining operations and further reducing coal supply, and coal-fired power plants followed suit.

Without the blog, I never would have thought about "dispatchable generation" -- a reader alerted me to that some years ago. Solar and wind energy are not dispatchable.

Coincidentally, a reader sent me a link to this article overnight: can the gas glut kill the Permian.

What my son-in-law brought home for Christmas, a Western Star. 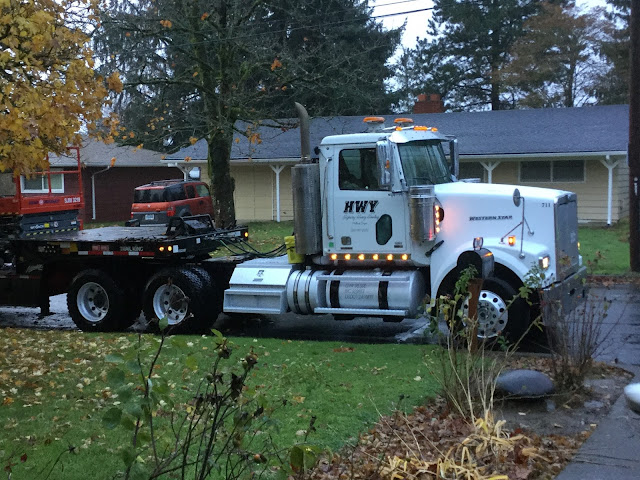