I've pretty much lost interest in Covid-19 for reasons which I've already discussed, but this was beyond the pale. Cases in North Dakota have hit an all-time high; Bismarck is off the chart compared to Fargo with regard to number of active cases. Grand Forks, home of UND, is not far behind Bismarck. But is the number of deaths in Fargo compared to the rest of the cities in North Dakota that really grabs your attention.

I've not seen any follow-up reporting yet with regard to Covid-19 and the Sturgis rally.

I track the Wuhan flu here.

At that site you can track statistics by state.

From The Bismarck Tribune today: 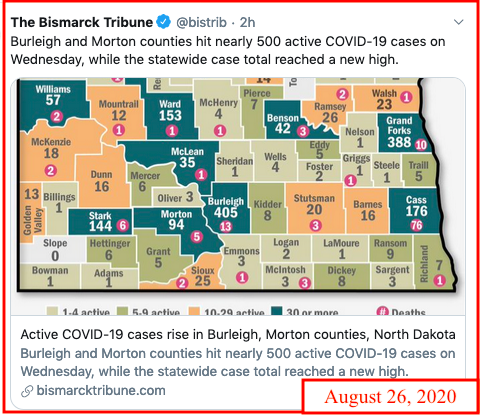