Wow, it's hard to believe I started tracking this issue -- re-balancing -- back on January 24, 2017. I tracked it for about a year before I finally felt I had an understanding of the issue.

My first spreadsheet was posted May 3, 2017. This was about the time Saudi Arabia knew it had to turn off the spigots. Saudi tried killing the US shale sector by opening the spigots from 2014 to 2016. That tactic almost drove Saudi Arabia into bankruptcy.

So, the data points, US crude oil inventory:
I believe that we dropped to a low of around 420 million bbls after a year of re-balancing. But since then, US shale production has skyrocketed -- outpacing experts' forecasts.

Today, we stand at 447 million bbls. So the spreadsheet begins anew, but slightly different format:

Up until a few weeks ago, "we" were trending down toward 22 days, but since then trending back toward 27 days, link here: 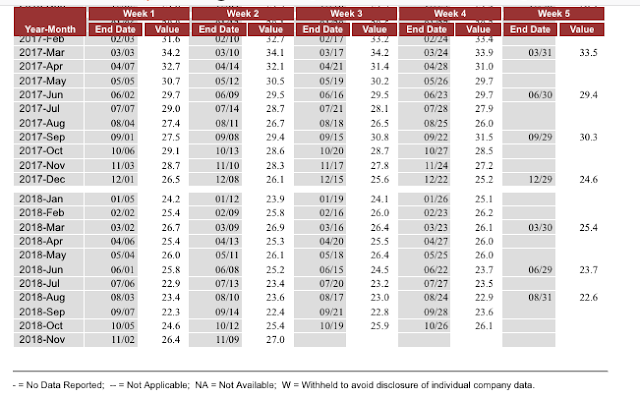 For newbies: 22 days versus 27 days may not sound like much, but 22 days is close to 21 days, or three weeks; 27 days is close to 28 days, or four weeks. In every sector in the US, "just-in-time" delivery is defined as "two-weeks of inventory." For the US oil sector, JIT is about three weeks. The range is 21 days to 35 days, three weeks to five weeks. We are pretty much in the middle of that range.
Posted by Bruce Oksol at 10:57 AM