October 12, 2016: this was announced last week (October 6) but I missed it; it must have really been buried.


The number of announced layoffs by U.S.-based companies rose in September to the highest level in two months.

Employers announced plans to cut 44,324 jobs last month, a 38 percent increase from August, when total job cuts of 32,2188 fell to lowest total since May.

September's was the highest monthly total since July, when 45,346 layoffs were announced.

Despite the monthly rise, September's total was 25 percent below the announced job cuts a year ago.

The biggest job cutter last month was the education sector, rising by 363 percent to 8,671.

Fueling the cuts was the collapse of for-profit college ITT Technical Institute, which sustained 8,000 job losses.

Cuts in the computer industry in September totaled 4,152 jobs. The sector's year-to-date layoffs were second only to the energy sector, which announced 98,733 cuts for the nine-month period.

October 8, 2016: disappointing 156,000 jobs added in September -- USA Today. Honest analysis unlike Bloomberg. To the best of my knowledge, USA Today is the only major news outlet that noted this is the consecutive month in which the jobs number was disappointing.


Payroll growth was disappointing for a second straight month in September as employers added 156,000 jobs, which raised questions about the health of an economy that was expected to perk up from a prolonged slump in the second half of the year.

Reported last month: the Goldilocks number. Jobs created in August much less than forecast; expectations had been for 180,000. In fact, only 151,000 jobs were added, well below the magic number of 200,000 necessary for economy growth. Unemployment unchanged from a revised upward revision one month earlier.

Later, 2:58 p.m. Central Time: stock market drops after jobs report -- New York Times. That was the headline. And then this lede:


Suppliers of basic materials are leading the stock market lower in afternoon trading Friday after a solid report on hiring in the U.S. last month. [I can't make this stuff up.]

Later, 11:48 a.m. Central Time: wow, who wrote this report "September jobs report close to "Goldilocks" number." Wow. Here it is -- the Fed's Fischer. Talk about spin. Worthless. I guess that's why the market is down 101 points -- the jobless number was so incredibly great. LOL. Folks give Matt Drudge a lot of grief, but it certainly seems he has not lost touch with middle class Americans.

Later, 10:14 a.m. Central Time: as predicted, the Bloomberg spin countered. "US created lower-than-expected 56,000 jobs in September." -- CNBC. Almost 100 million Americans not in workforce; unemployment ticks up to 5.0%. Obama spinmeisters thrilled with report -- within their "broad" range of expectations. Their phrase, not mine - at the video at the CNBC-linked story.

Later, 10:11 a.m. Central Time: I predicted this screenshot in the original post (see original post below). Screenshot from the most quoted internet news aggregator in the universe: 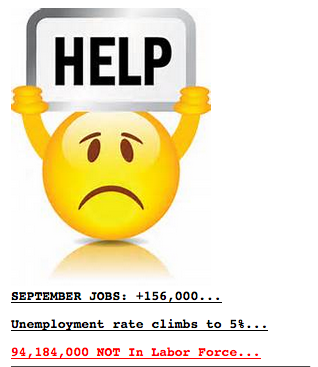 The number is well below what analysts forecast, and the forecast was way below what was needed to exceed 200,000. Anything below 200,000 = economic stagnation.

However Bloomberg spins it, it's not a good report. We'll see those stories later today. Meanwhile, buried in the second paragraph it was noted that US unemployment rate actually increased to 5%.

Bloomberg would suggest that the rate rose because more folks went back into the labor market, which, of course, was not true. Again, anything less than 200,000 = economic stagnation, and the forecast was below that, and the actual number was below the forecast.

Okay, got that out of my system. Time to move on.

For the archives: Jack Welch's debunked jobs conspiracy, four years later. The article failed to mention, that in fact, the US government did indeed falsify the numbers -- see below.

When you read that article on Jack Welch remember this post from January 22, 2015:


Over the two years that I had been posting these updates, it had become clear/obvious that the figures were often suspect, if not outright falsified. On November 18, 2013, it was reported that, indeed, unemployment figures have been falsified.


In the home stretch of the 2012 presidential campaign, from August to September, the unemployment rate fell sharply — raising eyebrows from Wall Street to Washington.

The decline — from 8.1 percent in August to 7.8 percent in September — might not have been all it seemed. The numbers, according to a reliable source, were manipulated.

And the Census Bureau, which does the unemployment survey, knew it.


The inventory of drilled-and-uncompleted wells (DUCs) in the U.S. Lower 48 grew by nearly 1,900 between the months just before oil prices and rig counts collapsed and early 2016—a 50% increase in a roughly two-year period, according to new DUCs data in the Energy Information Administration’s (EIA) September Drilling Productivity Report (DPR—See the DPR DUC report here.).

Since January’s peak of nearly 5,600 DUCs, producers have been working down the national inventory of DUCs, with the DPR showing the overall count closer to 5,000 as of August (2016) ––but that is still up more than 1,300 from the December EIA’s 2013 baseline. This incremental growth in the number of “dormant” wells is key to understanding and predicting how long production can remain supported or grow in a low-rig count environment. Moreover, there are regional differences in the DUCs inventory counts and trends that provide critical insights on how various market factors are impacting drilling activity. Today, we walk through the EIA DUCs data for each of the producing regions.

Starting from the top left graph in Figure 1—the Bakken—the EIA DUCs spreadsheet estimates the Bakken carried 569 DUCs in December 2013. The inventory since then has been somewhat volatile but generally grew by nearly 300 (53%) to a peak of 866 DUCs in April 2016. Since then, DUCs in the Bakken have come down somewhat from that peak to near 800, but are still over 200 higher than in December 2013.

NDIC reported the number of DUCs in North Dakota in excess of 900, well above the peak the EIA reported.

Top story in Los Angeles Times today, the headline: "So, you think Obamacare is a disaster? Here's how California is proving you wrong."

I did not read the article, the headline was enough for me. Now let's check a few stories on ObamaCare in California -- from the Los Angeles Times and other sources -- fact-checking the fact-checkers.

So, when ObamaCare was first introduced in California, rates rose as much as 146% and physicians left the exchanges. [If you like your doctor, you can keep your doctor -- not if your doctor leaves the exchange.]  And now, when the LA Times says California Obamacare is doing just fine, rates are rising three times the increase of last two years.

Mid-day trading: the market must not have liked that dismal jobs report, nor the fact that it's being reported that President Obama increase US debt by $9 trillion during his short stay in the White House. The Dow 30 is down 101 points. NYSE: