For the conspiracy theorists: the CDC Covid-19 vaccination-tracker site appears to be down. This occurred less than twelve hours after Joe Biden mentioned he would be sending US National Park employees (who generally wear "brown shirts") door-to-door to check on folks who have not had their "Covid-19 vaccination." Next: a requirement to have the vaccine lot and vial number tattooed on the left arm.

Right on cue: Amazon and Apple are coiled springs about to explode to the upside. Over at SeekingAlpha.

What do US shale companies know that we don't know? US shale firms hesitate to pump more, despite oil's high prices. Link here.

Gasoline prices: President Biden is monitoring; wants lower gasoline prices. Asking Saudi Arabia to "open the taps." Interestingly enough, Saudi oil is almost identical to western Canadian sands oil that would have come to the United States via the Keystone XL pipeline had the president not shut down the pipeline. I can't make this stuff up.

Gun violence: escalating in New York City and Los Angeles. Apparently not due to the "Defund the Police" movement.  Homicides are up 25% so far this year across Los Angeles, although the brunt of the increase has been felt in South Los Angeles, where killings have jumped 50% over the same time last year.

A star is born: the recall effort to remove Governor Newsom from office will backfire. He will become a national celebrity and run for federal office.

Fire the regulator; that will make things right with the world. From Politico, Biden's move to fire the top US mortgage regulator is triggering falls from fellow Democrats to use the agency to expand access to loans for lower-income people, who have struggled to buy homes since the financial crisis began. This should work out well; buying houses at the top by folks who couldn't afford the houses when they were fifty percent less expensive. Link here.

The great Gatsbys (plural). Wealth concentration at the very top now exceeds the peak of the Gilded Age. Link here. It's quite remarkable to say the least.  Did we mention that Mike Bloomberg has sixteen houses? 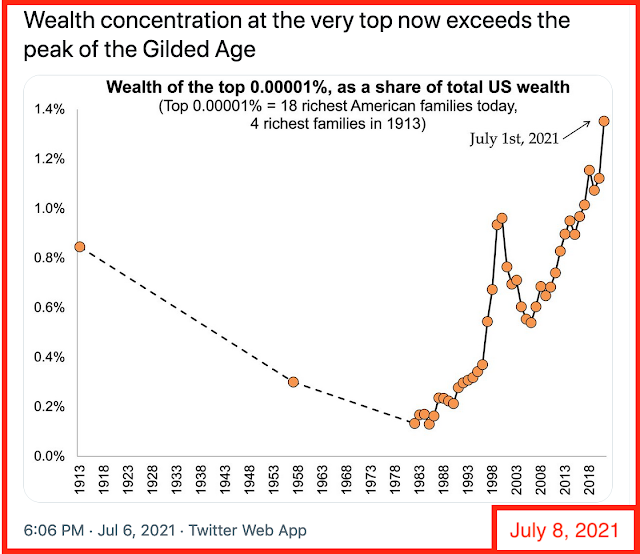 Great timing: "Pelosi bought both Amazon on May 21 when it closed at $3,259.0. Fast forward six weeks and great news for Amazon after the Pentagon pulled the rug out from Microsoft's $10 billion JEDI cloud computing deal (opening the door for Bezos), and the trade is looking great." Link here.