July 23, 2018: from SeekingAlpha --
July 23, 2018: the record was set July 19, 2018, a couple of days ago. Based on the 11:00 a.m. - 12:00 noon reading, we are on track to beat the record set on July 19th. It will be close, very close and if a new record is not set, it will be because folks are trying to conserve energy. Even if the absolute temperature is not higher on any given day, the a/c demand doesn't change much (at all?) when the temperature is between 98 degrees and 108 degrees. The day of the week and activities taken by the public on a given day have a much, much great impact on a/c demand.

Wholesale prices for electricity secured a day in advance reached three-year highs, soaring above $1,500 a megawatt-hour for several hours in the region on Wednesday and Thursday, as people blasted their air conditioners to stay cool. 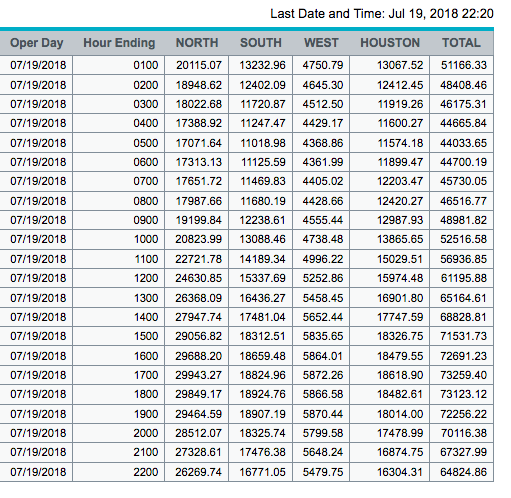