I assume "everyone" includes IEA, OPEC, EIA, and HH.

The article is linked here. The writer's thesis: unlike conventional oil, it is incredibly difficult, if not impossible, to forecast future production of unconventional oil:


Forecasting output growth used to be a relatively simple undertaking. Developing oil fields had a lead time of several years and the flow of new oil coming from them was reasonably visible over a 12-month horizon.

Now, lead times are measured in weeks rather than years for new shale projects, and the large number of companies operating in the sector have made forecasting oil output growth almost impossible. The uncertainty makes it very difficult for OPEC and its friends to assess how they should respond. This raises a risk that they hesitate on extending the production reductions.

Analysts briefing the group last week said forecasts of growth in shale oil output next year ranged from 500,000 barrels a day to 1.7 million. That margin of uncertainty is as big as the entire output cut the group agreed to a year ago.

A few days ago, from MarketRealist:


The U.S. Energy Information Administration (EIA) estimates that about 4.25 million barrels per day of crude oil were produced directly from tight oil resources in the United States in 2016. This was equal to about 48% of total U.S. crude oil production in 2016.

For me, this was the important takeaway:


OPEC should resist the temptation to delay a decision on extending its current output deal until the picture becomes clearer, because the situation isn't going to get any clearer.

The widely differing assessments of this year's growth in shale output show that even by the first quarter of next year, there will be no unified view of 2018.

OPEC's decades-old policy of acting as the world's swing producer has run out of steam -- at least so long as the U.S. shale sector is able to respond rapidly to movements in the oil price.

Finally, we are getting away from the discussion of "swing producer" and now talking about "most responsive operator." It is now agreed that US shale operators are the most responsive to the price of oil. I remember not too long ago analysts suggesting it would take US shale operators up to six months, maybe a year to respond to prices; I always said operators could respond in days. Even this article says response is measured in weeks (now) instead months. I think one could argue US shale companies can respond in days instead of weeks.

With all this talk about "forecasting" and inability of analysts able to understand the Bakken revolution, it was interesting to take a look at EIA's forecast one year ago, forecasting tight oil production for 2017: 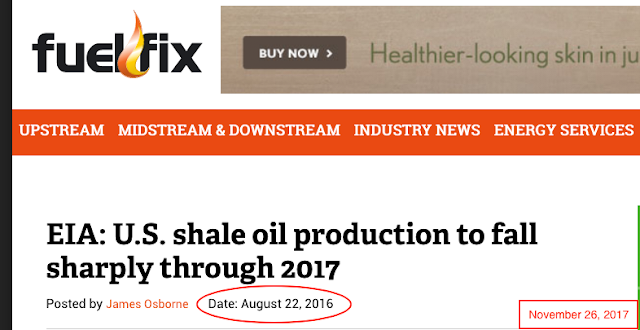 The flow of oil from U.S. shale fields is projected by government analysts to fall 14 percent by 2017, as the reverberations of the recent crash in crude prices are felt.

Production from those shale fields had increased exponentially over the past decade as hydraulic fracturing and horizontal drilling techniques were improved.

Shale oil now accounts for more than half of the nation’s crude output. But according to a report Monday by the U.S. Energy Information Administration, shale oil output – which peaked in 2015 at 4.9 million barrels a day – will fall to 4.2 million barrels by the end of next year.

The fall is “mainly attributed to low oil prices and the resulting cuts in investment. However, production declines will continue to be mitigated by reductions in cost and improvements in drilling techniques,” the report reads.

Pretty amazing, on so many levels.

From the WSJ -- I am only posting this for the archives. This is not something that concerns me.
Posted by Bruce Oksol at 9:24 AM