OPEC: "extraordinary" steps will be required in 2018 -- Bloomberg.

Panama Canal: How many remember this story by The New York Times: what if the Panama Canal expansion doesn't work. It was another fake news story and I had a bit of fun with it. Today, in The Wall Street Journal, the Panama Canal's big bet is paying off.


Ocean operators switch some sailing from Suez as bigger ships can cross new Panama locks to reach US East Coast.

Panama’s $5 billion investment to expand its century-old canal is paying off as shipping lines send more U.S.-bound cargoes through the passage instead of the Suez Canal.
Ships nearly three times as large as the ones crossing before the expanded locks opened in June of 2016 are bringing tens of millions of additional dollars in tolls and a trading boom to U.S. East Coast ports, allaying some fears that investments to cater to the bigger vessels wouldn’t see enough returns.

Since the start of the year, transiting tonnage at the Panama Canal has increased by nearly 23%, canal executives say. Last week marked the 2,000th transit of a ship that wouldn’t have fit through the old locks.

Heard on the street: the truth is catching up on Tesla. Story here. CEO Elon Musk is a visionary, but there is a fine line between setting aggressive goals and misleading shareholders.


Tesla is inching closer to that line. Tesla was making three Model 3s on an average day in the third quarter. Mr. Musk should have known in August, when production guidance was reiterated, that the company wasn’t going to produce 1,500 Model 3s by the end of September.

There are other examples. At the Model 3 launch event in July, he told reporters that Tesla had received more than 500,000 customer deposits for the car. Five days later, after a series of questions from The Wall Street Journal, Mr. Musk revised that number to 455,000 on a conference call with investors. The earlier, higher figure he quoted had been “just a guess.” [By the way, this is quibbling on the part of The WSJ -- 500,000 vs 455,000.]

Investors approved Tesla’s decision to pay about $8 billion in stock and assumed debt to acquire Mr. Musk’s struggling SolarCity last fall, after Mr. Musk demonstrated roofs that could generate solar power for homes and promised production would begin in the spring. A year later, those roofs are conspicuously absent, beyond some installations for Tesla executives.

Why Tesla is struggling to build the Model 3 -- Business Insider. Five reasons given, but no real explanation except possibly reason #5 -- the Model 3 may not be that much simpler to build than the Model S or the Model X. The "learning curve" may be holding them back, but Elon Musk does not care.

Puerto Rico: by the way, this is why Elon Musk's offer to help Puerto Rico with its electricity problem is just that -- an (empty) offer: miles and miles of downed power lines. Install the solar panels but how does one get the electricity from the batteries to the homes? The problem is not electricity generation (diesel generators would be a lot more efficient than solar energy / batteries -- and if he's talking about installing solar panels on roofs -- there are no roofs in Puerto Rico any more -- well, not many.

Boeing in Seattle: see the comments at this article --


I am a retired Boeing executive and  have a bit of inside information. All space related business in now in Huntsville, Alabama; all military aviation except the C-17 is in Saint Lewis, Missouri; all electronics are in Southern California. In the Seattle area the wide body assembly plant in Everett and the narrow body assembly plant in Renton are all of the major programs left in Washington.  Total Seattle head count about 20,000 a far smaller number than at any time after 1941.

Reminiscing: I remember the good old days, waking up early to check the Drudge Report, to see where President Obama was golfing on the weekend/ now I wake up early to see if North Korea has launched another ICBM.

... though this looks better for carnival/Mardi Gras: 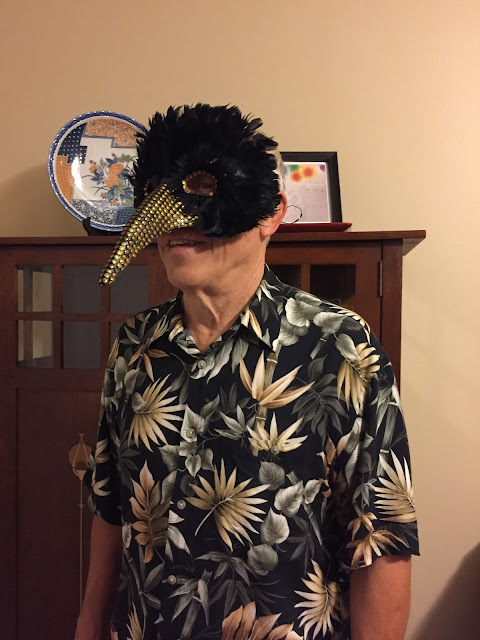 This might be my last year to go trick or treating (but I say that every year).