Update on the Russian Northern Fleet: based on the last "ping" about two hours and 15 minutes ago, the fleet is almost exactly midway between Crete and Cyprus. In addition, the tug is moving as fast as I've seen it move this entire voyage. The previous "high" was 11.1 knots; at the last "ping" two hours and 15 minutes ago, the tug was moving 12.2 knots.

Wow, I could not be in a better mood. The NASCAR race was delayed by rain, and I will see the whole race tonight.

During the commercials interrupting the NASCAR race, I will check in on Sunday Night Football.

I was able to see our older granddaughter play in the largest north Texas water polo tournament in history this weekend (see trophies below). The tournament was held over two days, and was so "big," it was held in two venues, one natatorium in Southlake; one in Keller. Highlights for our 13-year-old:
I was able to spend three hours with Sophia today while her Dad was at work, and her Mom was with the middle granddaughter at Olympic Development for soccer players; Sophia and I always have a great time together.

After the NASCAR race and Sunday Night Football, then the British comedies starting around 11:00 on public television.

By the way, the NASCAR race is at Texas Motor Speedway, just a few minutes west of us.

As busy as I was today, I was still able to get a few hours of reading in; connecting the dots with Shakespeare, Dante, Chaucer, and Marlowe; also re-reading a bit of Helen of Troy and re-learning the geography of the eastern Mediterranean, which seems a bit relevant tonight.

So, all in all, a great weekend. 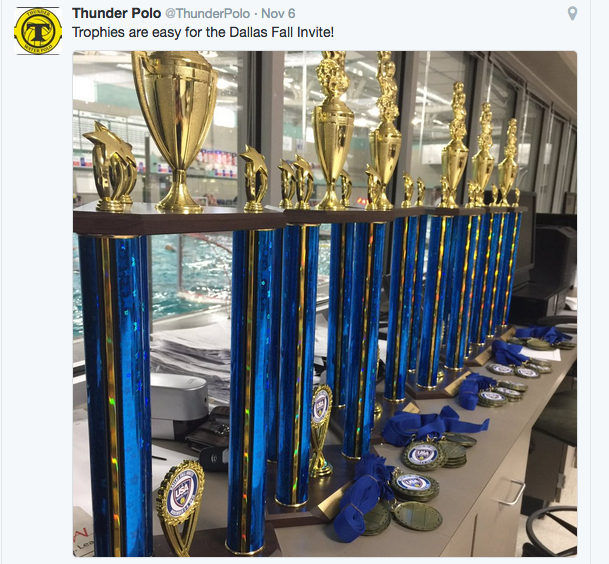 I must have missed something. I thought all four drivers had been determined for the round of four, but tonight, it is being reported that only Jimmy Johnson is guaranteed to be in the round of four. The other three will be decided after Martinsville (last week); Texas (tonight); and, Phoenix (next week). The other seven still in the chase: Denny Hamlin (11); Matt Kenseth (20); Kyle Busch (18); Joey Logano (22), Kevin Harvick (4); Kurt Busch (41); and, Carl Edwards (19).

Of my family members and friends of my family members, I have been very clear that I support Trump in this election. I said that many, many months ago and have never brought it up in discussion since. I won't talk politics with family. We have friends out in California who know my preferences. The other day they sent me a link to an article that they thought might "help" me. LOL. I think they thought I might be having "concerns" or "problems" or cognitive dissonance with this election. I provided a very, very long response but will print just a bit of it for the archives. This was my reply with regard to the presidential campaign:


I don't think I could be happier with any presidential election as I am with this one this year, on so many levels.

First, it's a real, real, bloody, dirty fight (the Muhammad Ali vs Sonny Liston fight comes to mind; or perhaps Al Capone vs Eliot Ness; or perhaps cockfights, which are illegal in the US).  By comparison, and in retrospect, the Bush-Gore, Bush-Kerry (I had completely forgotten that one), the McCain-Obama, the Obama-Romney races were sleepers. Really, really boring. Finally, we have a real contest. Love it. The only previous contest in modern history that might have been as nasty was the Johnson-Goldwater race.

Second, it's very possible the lawsuits and contests on election day could push the outcome into "overtime." It will be interesting to see what replaces "hanging chads" this year. Hopefully it won't be what I think it will be.

Third, when it's all over, assuming there is an "end" by the end of November, there will be a real catharsis for any American emotionally involved in the outcome.

For me, I only want my two oldest granddaughters to be happy with the outcome (they are watching very intently). The books I've been reading have made a huge difference in my thoughts about this election. The books have nothing to do with contemporary politics but help me put a lot of things in perspective.

The reply was much, much longer, but mostly about the books I've been reading the past few months.

This is the reason this election does not bother me all that much: Americans are going into the election with their eyes wide shut. According to one source this "means a person refuses to see something in plain view, because of preconceived notions of what this something should look like." The source suggests this is often true of those who we might consider naïve but I would argue, just like the movie of the same name, naïveté has nothing to do with it.

Obama was a blank slate in his first presidential campaign; Americans did not know who he was or what they were getting.

"Blank slate" is the last phrase that describes the two opponents in this race. Every voter knows exactly who they are voting for. Good, bad, indifferent, whoever wins, American will know exactly what they are "getting" when the 45th president is sworn in. Hopefully, it's not Tim Kaine.

[Seriously, I had completely forgotten that John Kerry was once the Democrat Party's nominee for president. What were they thinking?]

Having said that, other than Denver fans and Oakland fans, is anyone really watching tonight's Sunday night game? And, apparently, the Thursday night games this season have been even worse. I don't know; I haven't watched much NFL on Thursday nights.

Today, while taking care of Sophia I had some Sunday NFL game on in the background. I don't recall which game (oh, that's right, it was the Green Bay - Colts game). I had the volume on "mute" because Sophia and I were engaged in some activity. What surprised me was the number of "flags thrown" or penalties. It seemed every play or every other play a yellow flag was being thrown.
Posted by Bruce Oksol at 9:51 PM