January 2, 2015: to the list below -- the "things" Saudi Arabia is "facing," add the turmoil caused by the execution of the prominent Shiite cleric.

The [London] Guardian from a couple of days ago: retrenchment, recession, revolution? The article breaks down the challenges by country, and leads with this:


There have been four sharp increases in the price of oil in the past four decades – in 1973, 1979, 1990 and 2008 – and each has led to a global recession. By that measure, a lower oil price should be positive for the world economy, with lower fuel costs for consumers and businesses in those countries that import crude outweighing the losses to producing nations.

But the evidence since oil prices started falling from their peak of $115 a barrel in August 2014 has not supported that thesis – or not yet. Oil producers have certainly felt the impact of the lower prices on their growth rates, their trade figures and their public finances butthere has been no surge in consumer spending or business investment elsewhere.

Economist still reckon there will be a boost from a lower oil price particularly if it looks as if the lower cost of crude will be sustained.

Dhaval Joshi, an economist at BCA, a London-based research company, said: “A commodity bubble has deflated three times in the past 100 years: the first was after world war one; the second was after the 1980s oil shock; the third is happening right now.”
For the big producer countries, this is a major headache, the ramifications of which are only starting to be felt. Oil powers base their spending plans on an assumed crude price. The graphic below shows just how far below water their budgets are.


Low oil prices are not just squeezing Saudi Arabia’s domestic budget, imposing austerity on a kingdom not used to it: it is taking its toll on Saudi support for foreign projects too.
The kingdom this week announced swingeing budget cuts for 2016 to address an alarming deficit of 15% of GDP run up this year. Subsidies for water, electricity and petroleum products are likely to be cut, and government projects reined in.

But overseas beneficiaries will face some austerity too. For years, Saudi Arabia has used its oil wealth to support friends and allies around the world, including media organisations, thinktanks, academic institutions, religious schools and charities. Countries that have traditionally benefited from Saudi largesse include Jordan, Lebanon, Bahrain, Palestine and Egypt.

But now the IMF has raised the prospect that Saudi Arabia could go bankrupt in five years without changes to its economic policy, cuts in support to foreign allies seem inevitable.

I've written about this before, focusing on Palestine. I had forgotten about, or did not know about, the largess provided Egypt.

Saudi is in the fight of its life:

There is a never-ending list of "best hamburgers" in the US. Seldom does one find Whataburger on that list, but here it is, 2015: the best burger in America, voted by readers, Fast Company.

Whataburger is seldom on the list because it is a Texas phenomenon, and most "foodie" publications are headquartered on the west or east coasts.

Head-to-head, Whataburger beat In 'N'Out. (And, of course, after that, there is no competition, though Five Guys would be tough head-to-head.) [My bad. LOL. I did not even see that the race came down to Five Guys vs Whataburger. Wow. Wow. Wow.]

I have to agree, that head-to-head, Whataburger beats In 'N Out. First of all, there's only one In 'N Out choice, okay, two (with or without cheese). With Whataburger, 1000's and all truly cooked to order. Just as fresh as In 'N Out. I enjoy In 'N Out when I'm out in California, but in the big scheme of things, I think it's overrated.  Jalapenos on your hamburger at In 'N Out? Out of luck. And that's just for starters.

This competition was from this past year, 2015: 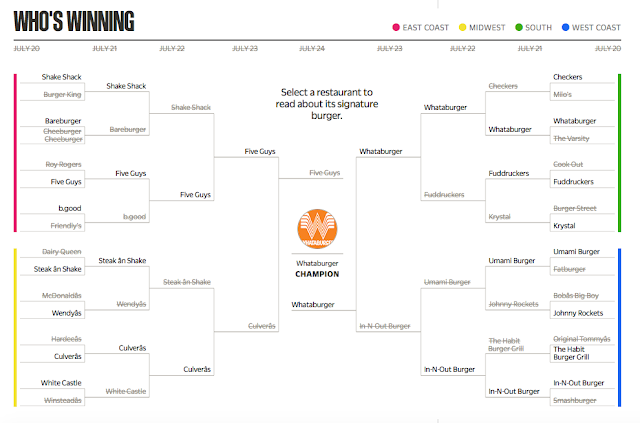