Gas demand across the European Union is expected to increase by 7 percent in 2015 following years of decline.

It looks like all those wind towers in Texas and North Dakota are working. Most recent atmospheric CO2 measurement shows we are again below 400. In the very, very small print in the screenshot below (dynamic link), you might be able to read that Scripps first measured an atmospheric level of CO2 above 400 over two years ago, back on May 10, 2013. Since then, not so much. Perhaps not only has atmospheric CO2 leveled off, but it's starting to decrease. There has been no global warming in 19 years. 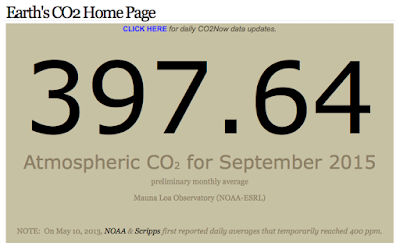 Now it looks like Europe is working on becoming the only continent in the world that will depend on imported food. The New York Times is reporting:

Call it the “Coalition of the Ignorant.”

By the first week of October, 17 European countries — including Austria, Denmark, France, Germany, Greece, Hungary, Italy, the Netherlands and Poland — had used new European Union rules to announce bans on the cultivation of genetically modified crops.

These prohibitions expose the worrying reality of how far Europe has gone in setting itself against modern science. True, the bans do not apply directly to scientific research, and a few countries — led by England — have declared themselves open to cultivation of genetically modified organisms, or G.M.O.s. But the chilling effect on biotech science in Europe will be dramatic: Why would anyone spend years developing genetically modified crops in the knowledge that they will most likely be outlawed by government fiat?

In effect, the Continent is shutting up shop for an entire field of human scientific and technological endeavor. This is analogous to America’s declaring an automobile boycott in 1910, or Europe’s prohibiting the printing press in the 15th century. [They've shut up shop for all climate study also.]

Beginning with Scotland’s prohibition on domestic genetically modified crop cultivation on Aug. 9, Europe’s scientists and farmers watched with mounting dismay as other countries followed suit. Following the Scottish decision, signatories from numerous scientific organizations and academic institutions wrote to the Scottish government to express grave concern “about the potential negative effect on science in Scotland.”

So much more at the linked story. A must read. Meanwhile, the Europeans need to read How the Scots Invented the World: The True Story of How Europe's Poorest Nation Created Our World And Everything In It,  Arthur Herman, c. 2002, a reprint edition. This is perhaps one of the best books I've ever read.

By the way, we've seen this "anti-science" movement before. In the 19th century, in response to the Industrial Revolution, the Romantic Period in art and literature developed and flourished. The Industrial Revolution, according to wiki, about 1760 to 1840 at the latest. The Romantic Period, according to wiki, was at its peak from 1800 - 1850. It may have been at its peak in the first half of the 19th century, but I think it evolved and found footing in the modern era (Virginia Woolf, Vanessa Woolf, et al).