Saturday Morning Ramblings; No Wonder It Doesn't Feel Much Different -- 83% Of The Government Is Still Functioning

I'm not sure if I will do the usual Wall Street Links or simply ramble a bit this morning.

Let the rambling begin. This could be a very, very long post. Based on my own experience, I  know folks don't like to read long posts on blogs, so I assume few, if anyone, will read this post, which allows me to note things I would otherwise not post. But they will be buried deep in the post much later.

I remember all the grief I used to take from enquiring minds elsewhere about my concern and Lynn Helms' concern that the federal government could shut down the Bakken with their federal fracking rules. We're about to get a hint of how real this threat is. Whiting won't drill on federal land in the Williston Basin because it is too expensive and too time-consuming to get the federal permits.

Fortunately for Whiting, their cash cow was just north of the reservation. In the graphic below, look how close Whiting got to the reservation. The "white" is state land; the "grey" is BLM. 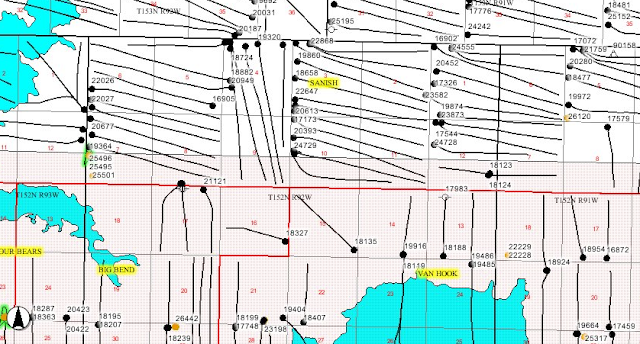 But look at something else. It may simply be a function of the operators, but note the density of wells in the "state" land and the relative paucity of wells in the "BLM-managed reservation." I doubt the best Bakken stopped at the edge of the reservation. Whiting is putting in eight (8) wells in each spacing unit (that will soon increase dramatically) while operators in the "grey" appear to be averaging one to two wells across the entire reservation. If one goes to the NDIC GIS map server to see the entire area, it is even more dramatic.

Now, with the government shut-down, it is possible all oil activity will stop on federal lands on-shore. This has nothing to do with permits: even wells that are already producing need to be monitored by federal regulators. I don't know what the effect will be on federal land in the Bakken yet, but over time we should get a better idea.

Should we be concerned? So far, Wall Street is not worried. Yesterday, on the stock market, the Bakken operators had one of their best days ever, while the "majors" (CVX, COP, XOM) were flat or in negative territory.

Everyone agrees the government shutdown will be short-lived. But it provides validation that Lynn Helms had reason to worry. If all fracking requires federal permitting in the future (including on all state land), it has the potential to shut down the Bakken as we have come to know it. Increasingly Americans are against fracking, and apparently more than half of Americans don’t know the recent oil boom has increased domestic energy production. This apparently includes a nominee for the Geico Rock Award for 2013, the publisher of The Dickinson Press, who recently (as in last month) suggested the US is more dependent upon the Middle East for oil than any time in our history. Wow.

The tea leaves suggest the government shutdown is looking more and more like an extension of the sequestration. (Later: several hours after I posted this blog, the mainstream media posted a story saying that 83% of the government was still functioning [1:01 ET, Washington Times] and now it is being reported that 400,000 furloughed military civilians will be returning to work by Monday -- October 5, 2013, 5:57 p.m. As noted: this feels more like a continuation of sequestration, and, oh, by the way, the House voted to provide back pay for  furloughed civilian workers. It will be interesting to see if this "piecemeal" legislation which Harry Reid and President Obama have refused to consider will also be voted down/vetoed.)(400,000 military civilians furloughed represent about half of the 800,000 government civilians furloughed; if so, it sounds like the only government "agency" shut down is the National Park Service; the only thing affected by the shutdown on Monday will be the national parks; somehow that doesn't get my attention -- October 5, 2013, 6:57 p.m.)

If the US "runs out of money" and/or needs to shut down parts of the government because of funding issues, it seems the president and the Senate and the House need to be out front telling America and their constituents the government will do what it can to minimize the pain. The purpose of our elected officials is not to make things as difficult or as painful as possible.


Apparently, according to an anonymous Park Service ranger, “We’ve been told to make life as difficult for people as we can. It’s disgusting.”

It is incredibly telling about the attitude of this president to make things as difficult as possible, including attempts to talk down the stock market.

The lasting legacy of this administration for me will be the decision to physically evict WWII veterans from the WWII memorial in Washington, DC. Even the NY Times appears to realize this is all crazy; and it took a crazy Republican from Minnesota to open the memorial to vets. Even memorials that are not manned are all of a sudden closed off. I did not think there was anything this administration could do that would better define its attitude toward the American people when it closed the White House to Americans. But, incredibly, it found a way. The photographs and videos of the way the administration treated WWII vets at their memorials this past week will probably be the last memory I have as I fade into Alzheimer's.

If that was the visual legacy, I think the audio legacy will be Harry Reid asking why anyone would want to help one child with cancer which was his answer to a question about the government shutdown. That, too, is captured on video. As Hillary so famously said, voicing the feelings of this administration, "what does it matter?"

So, time to move on. It appears the House (and maybe the adults in the Senate) may be looking for a "grand" budget approach. I was surprised that Congress went into the weekend, day 4 of the government shutdown on Friday; day 5, today; and, day 6, on Sunday, with nary a comment on the shutdown. Monday will be the 7th day.

Hey, time for a video. Nothing is more boring than a long post without a video or a graphic. The "barrycades" are incredibly fitting:

with this: the Feds barrycade a parking lot.Vladimir must be laughing. It really is quite pathetic. The greatest nation on earth barrycading parking lots which require absolutely no funding.

So, there you have it: the visual of President Obama barricading a parking lot. I doubt he will take the opportunity for a photo-op at the barrycades.

So, the government shutdown aside, what are they doing in the Bakken? Well for starters, EOG is looking at 34 wells in a spacing unit. Operators are already putting eight (8) wells across in a spacing unit in the middle Bakken; now in the better Bakken they will target four formations with eight (8) wells each (4 * 8 = 32) and with the two "discovery" wells already there that equates to 34 wells on a spacing unit. If I remember correctly, EOG is looking at four different oil fields in the Bakken in which to do this.

I've kind of lost the bubble on this, but I believe this is correct. The question is how many wells might be drilled in the Bakken before it's all over. This has been the progression:
EOG is also setting new production records, routinely producing 100,000 bbls of crude oil in six months. It's expensive to complete a well the way they are completing a well, but sand is cheap, especially when you own the sand mines in Wisconsin.

So, how expensive is it to drill these wells? I don't know. I don't care. EOG says their expected rate of return on these high producers is 100%. That's the important metric. Rate of return.

Hey, talking about IPs, which we weren't. Did you see that incredible initial production number for EOG's Liberty 106-0107H (#22921) well? Sixty, as in 60 bbls of crude oil. In fact, I've never looked at the well file on that one. I will do it now to make sure that was not a typo by an NDIC intern. (I've been told there are no NDIC interns, so that's an inside joke if anyone from the NDIC is reading this.) So, here it comes. The download is almost complete. Wow, that was a shallow (vertical) well; 49 stages; 10.5 million lbs of sand. One has to got through 80 pages of frack data before one gets to the geologist's summary. Drilling time: one day short of a month, from spud to "cease drilling." This is a middle Bakken well. Almost 20,000 feet of drilling (9,000 feet below the surface) and the roughnecks "drilled the entire lateral was in or within 5 feet of the the published TVD windows." One word: incredible. Okay, what was the question? Oh, yes, that's right, the IP. Yes, EOG reported an IP of 60 on the sundry form. But now the mystery. The very top sundry form says the formation that was fracked was the "Three Forks." It is hand-written in ink on the form: "Three Forks." But yet, the geologist's summary says it was the middle Bakken. Adding to the mystery, it was my understanding that EOG Liberty wells with numbers 1 - 99 were middle Bakken wells, and 100 - 199 were Three Forks wells. Ah, yes, it never quits. Maybe this was permitted -- yup, there it is, on page 173 of the 194 pages (so far), the target was the Three Forks. So, there you have it. [I'm sure somewhere in the well file it's all explained, but I have to move on.]
Posted by Bruce Oksol at 8:54 AM