Just before the market opens:
Headlines:
At the open:
OPEC basket, link here: flat at $43.30.  Neither Saudi nor Russia can make it on $40-oil but one has to remember that "this $43.40" is nowhere close to the average so far this year. 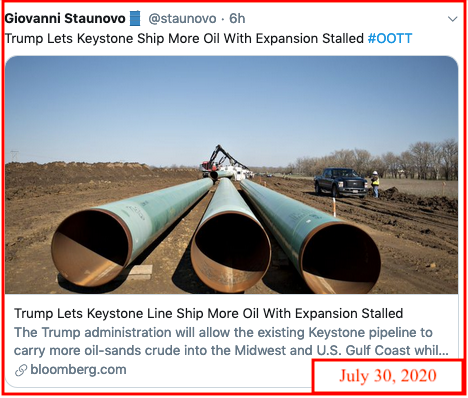 
The COVID-19 pandemic has undone a number of long-standing energy-market expectations. Just a few months ago, U.S. crude oil production was hitting new heights, export volumes were rising fast, and producers, shippers, and others were worried whether there would be sufficient marine-terminal capacity in place. Now, crude production is down sharply, and while crude exports have held up during this year’s market turmoil, the old belief that exports would keep rising through the early 2020s is out the window. Where does that change in expectations leave all those crude export terminals along the Gulf Coast, many of which were recently built or expanded to help handle the flood of crude that was supposed to be heading their way? Today, we discuss highlights from RBN’s new Drill Down Report on crude-handling marine facilities along the Texas and Louisiana coast.

Since the ban on most exports of U.S. crude oil was lifted in late 2015, the volumes of mostly light, sweet crude being exported from Gulf Coast terminals has taken off: from about 600 Mb/d in 2016 to 1.1 MMb/d in 2017, 2 MMb/d in 2018 and nearly 3 MMb/d in 2019. Anticipating that exports would as much as double by mid-decade, a number of midstream companies implemented expansions at existing terminals, built entirely new terminals, and/or explored the possibility of developing offshore export terminals in the deep waters of the Gulf of Mexico where they could fully load Very Large Crude Carriers (VLCCs).