The Army Corps of Engineers awarded the $1.28 billion project on May 6 to Fisher Sand and Gravel, a North Dakota-based company with offices in Tempe.


Samsung says the T7 Portable SSD can transfer a 10GB 4K UHD video in just over eight seconds, and 200 10MB pictures in just over two seconds. A three-year limited warranty is included, and optional password protection with AES 256-bit hardware encryption can be turned on.

This is most interesting: how folks are using the credit-card size SSD as a "computer." 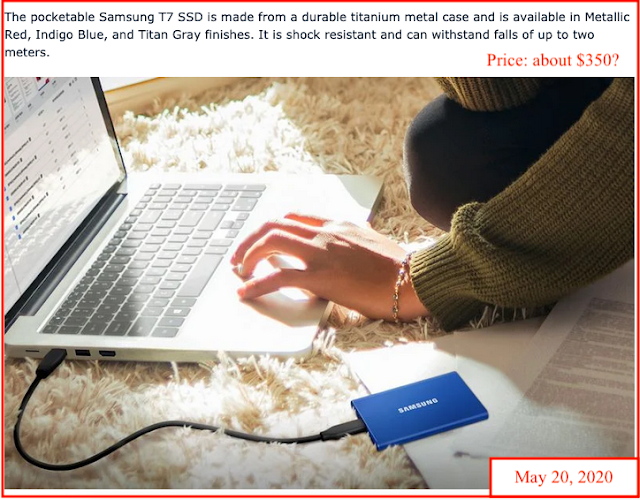 Crash and burn, Eglin Air Force Base: an F-22 last week; an F-35A yesterday. This is the third F-35A to have crashed.

ROE: for the US Navy, it's 100 meters in the Persian Gulf. Come closer and US Navy has authority to fire.


Four wells coming off confidential list today: Wednesday, May 20, 2020: 61 for the month; 111 for the quarter, 338 for the year:
RBN Energy: LOOP's unicorn status among crude export terminals.


Very Large Crude Carriers offer economies of scale and are the oil transporters of choice for shippers moving massive volumes of crude from the U.S. Gulf Coast to distant customers in Europe and Asia. VLCCs also can serve as cost-effective floating storage — in the current contango market, a growing number of these 2-MMbbl behemoths are being used to stockpile crude until its value increases in the coming months.

VLCCs can be loaded to the gills through reverse lightering at a number of deepwater points off the coast of Texas, but only one facility, the Louisiana Offshore Oil Port, can fill the supertankers to the brim at the port itself. LOOP also can receive fully loaded VLCCs, of course, and another ace up its sleeve is its 72 MMbbl of cavern and tank storage a few miles inland at Clovelly, LA. Today, we continue our series on Gulf Coast export facilities with a look at LOOP.

Amid all the energy market craziness of the past couple of months, at least one thing has held steady: U.S. crude oil exports. Last week, export volumes averaged 2.94 MMb/d, or just a hair under the 3.05-MMb/d year-to-date average.

With refinery demand for crude oil off sharply, crude production plummeting and storage space filling up, loading crude into tankers is playing an important role in keeping the broader crude oil market in balance — even if many of those oil-laden VLCCs, Suezmaxes and Aframaxes soon drop anchor in the Gulf of Mexico rather than sailing to foreign ports. Whether crude export volumes rise or fall in the coming months is an open question.