June 3, 2017: after Trump announces decision to exit the Paris climate accord, NYT with headline story: "new sheriff in town."

On November 23, 2016, this post from the blog: We've Had Two Lost Decades -- Will The Next Ten Years Be America's Decade?

We all know that full employment doesn't necessarily mean what it seems but one can't keep moving the goal posts. U3, U5, U6, whatever. And the goal posts the past 16 years has been U3 and now Trump has the lowest U3 in 16 years. 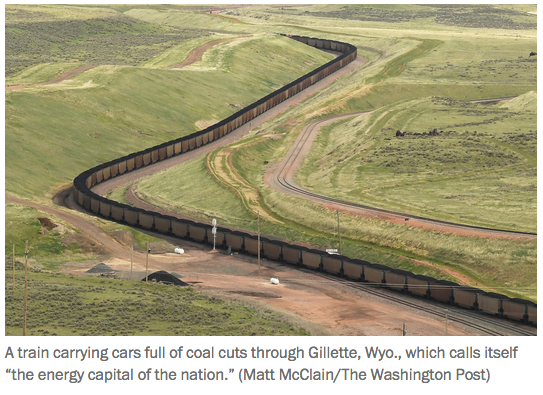 First, note the headline (again, this is The Washington Post): "in the Trump era." Donald Trump has been president for less than six months. It's T+135 or thereabouts. And already The Washington Post is calling "it" the Trump era. Eras generally last a long time. For presidents, at least eight years and then whatever might follow from there. And generally, in politics, "era" is associated with "good times," like the Eisenhower era, or the Reagan era. I've not heard his era referred to as the Bush era. And surprisingly, I've not seen the headline, the Obama era. A google search proves me wrong, but colloquially the "Obama era" has a somewhat hollow ring to it. I suppose it has to do with "eras" needing to be associated with "something." No one can really list any Obama-era successes (except getting Bin Laden; healthcare; and ... well, that's about it). I certainly cannot list any successes during the "Bush era."

There would have been a Kennedy era, no doubt, but his presidency was way too short to qualify.

But here we are, less than six months into a new administration, and The Washington Post already headlines "The Trump Era."

[I think there's been more interest / more excitement in Trump's first five months than there was in Obama's entire eight years. The Sean Spicer show is "must-see television." SNL knows a good thing when they see it. On the other hand, Obama seems more exciting out of office than in office now that he's free to be himself, as he told Vladimir.]

A nexus word search is going to put "the Trump era" and "optimism" separated by one word (in). So we have: "optimism in the Trump era." Less than five months into his presidency. And almost no speeches (except at his "thank you" rallies).

Listening to talking heads on liberal business networks today suggested that if the three major indices had all hit new records and that unemployment was at a 16-year low and there were no new wars (yet) and inflation was not on the radar scope and Hillary were president, the talking heads would have been all over themselves exalting over the "miracle of Hillary."

Now back to the linked article. It's story about ... coal. You have got to be kidding. "Optimism." "The Trump era." "Coal." Six months ago, who wudda thunk (certainly not Hillary -- six months after THE loss, and she is a) still in stage 2 of the seven stages of grief; and, b) delusional).

Less than five months into the Trump presidency, we already have the three major indices hitting record highs and unemployment at its lowest rate in 16 years. Ferguson is not burning; Baltimore is not imploding.

Walking away from the Paris climate accords sent a strong message to the rest of the world. Probably more than one message. Two messages:

I Did It My Way, Frank Sinatra
Posted by Bruce Oksol at 10:49 PM