With Iowa Likely To Keystone Another Bakken Pipeline, It's Time For NoDak Operators To Start Thinking Big -- May 19, 2016

I have to find the guy who said that when he was confronted with a problem he could not solve, he made it "bigger." A bigger problem, he thought, was easier to solve, and in the process would solve the original problem. [Later: yes, there it is -- that thought about making a problem bigger has been variously attributed to Einstein and to Eisenhower. I forget with whom I first associated it. I think it was Eisenhower.]

On another note, from an EIA tweet this morning: 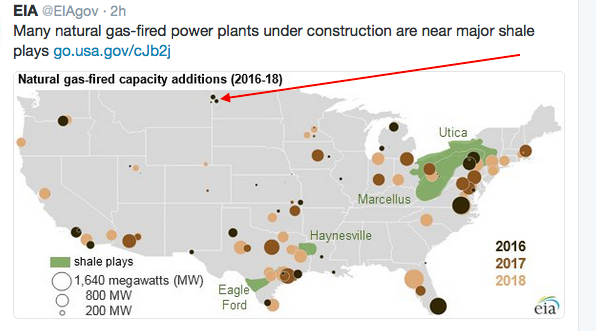 I would normally be updating my notes on Nick Lane's The Vital Question now but I forgot my book either at home or at Sophia's house. I was reading it to her while we were relaxing on the pool deck last night.

The good news: when I couldn't find that book on the way out of the house this morning, I grabbed another book that had just arrived from Amazon: John Hands' 2015 Cosmo Sapiens: Human Evolution from the Origin of the Universe.

This looks like it will complement nicely Nick Lane's book and Lawrence Krauss' 2001 Atom: An Odyssey From The Big Bang To Life On Earth ... And Beyond.

The two big problems that had to be solved with regard to evolution of life:
Watson and Crick and DNA sucked out all the oxygen in the room, and probably delayed work on the "energy" question. But now, some fifty (seventy?) years later, researchers are starting to get a handle on the energy question.

Wow, I can't wait until Sophia is old enough to start talking about biology and chemistry. I think I will start with her by having her draw "pictures" of atoms. LOL. She's pretty good at drawing circles so drawing atoms should not be that difficult.

On another note, we had a wonderful evening last night. The city where we reside had a special art exhibit reception featuring artwork from elementary, middle school, and high school students. The artwork at the convention center/visitors bureau will be on display for ten days.

Each art teacher in the area were limited to a very limited number of pieces to exhibit. In her fourth grade class (three classrooms) our middle granddaughter was one of only five students to have one of her paintings selected. I spoke with her art teacher at the reception last night. He was about 29 years old; very, very good looking; slim, athletic; a long-term resident of north Texas; first year at this particular school; and needless to say, very, very well appreciated.

He said he did not look at the names of the student artist when making his selections. At the end, he came down to two choices in front of him. Out of curiosity he looked to see who had painted the two pieces. One was an "incredibly good portrait"; the other was something one might see in a museum of modern art. He chose the latter.

Our middle granddaughter did not know what had been selected until she saw it last night. She was quite surprised: she said that the piece he selected was just some doodling. LOL. The art teacher said he chose it because portraits at this age and at these types of exhibitions are fairly common. He was looking for something with more imagination, something that seemed to "stretch" the artist's imagination.

We spoke about that when I took her to school this morning. She was not at all aware of the back story. I told her that it reminded me of a story about an art exhibit she would not have known about. I mentioned the first exhibit of Monet's paintings and how they had been rejected at first. She said she knew all about that story and impressionism. LOL. Fourth grade. Wow.
Posted by Bruce Oksol at 9:18 AM