The price reduction marks the end of a special program that since 2014 had allowed the USPS to temporarily increase postage prices to make up for revenue it lost when mail volume declined sharply during the Great Recession of 2008 and ’09. But regulators capped the amount the USPS could recoup with the surcharge at $4.6 billion--a total that the Postal Service is set to hit by this Sunday, April 10.

Once the USPS reaches that ceiling, it is required to roll back the 4.3% surcharge it had tacked on to first-class mail and commercial postage rates. That means that the cost of a stamp to mail a standard letter will decrease from 49 cents to 47 cents this Sunday.

The price of sending a postcard will also drop by a penny, to 34 cents, while international mail will go down by a nickel, to $1.15 per letter instead of the current $1.20. 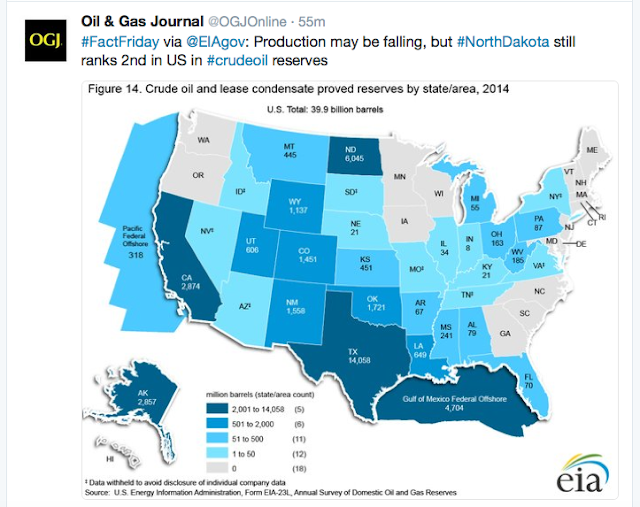 From the hound of Baskerville: the most interesting "thing" to note about the graphic above -- the Obama doctrine -- no off-shore drilling in the Atlantic.

I find this quite incredible. South Korea accounted for 15% of liquid natural gas (LNG) trade in 2014. Fifty million people. About the same as California-Arizona. Just saying. 15%.

I mentioned in a personal e-mail to a reader the other day that about six weeks ago I began a strict/severe weight reduction program. I hit the first plateau at about two weeks, and I've been at that "weight range" for the past several weeks. I plan to stay at this weight until I adjust to it, and then work to get to the next "plateau."

The first two things I did: worked on shrinking the size of my stomach -- thus things like popcorn, diet cola, etc., had to go; and, all alcohol intake had to be stopped.

In 2015, my goal was to "understand" Scotch; I accomplished that goal. But Scotch is "out."

In 2016, my goal was to "understand" the martini. I accomplished that goal. So, martinis are "out."

I honestly do not recall when I last had a beer. I guess it was with my best childhood friend when I was last in the Bakken in February, 2016. One and a half beers if I recall correctly.

There will always be exceptions. For example, maybe one martini once a month when we have sushi at Kobeya, South Lake. The one "resolution" I failed: giving up diet sodas. But volume intake has decreased significantly.

I say all that to say this. I've never understood tequila. But in this week's issue of The New Yorker there's an 8-page article on a 31-year-old woman, who at age 26, introduced mexcal to US drinkers and never looked back. An incredible success story.


Bricia Lopez is the mezcal queen of Los Angeles.

Five years ago, Lopez, who is thirty-one and imposingly savvy, persuaded her father to let her build a mezcal bar at Guelaguetza, the restaurant that he opened when the family moved north from Oaxaca, a center of mezcal culture, in the mid-nineties.

He didn’t know if Americans would like mezcal, or if Mexicans would admit that they did. But he decided to trust Bricia, and she focussed her offerings on premium mezcals—high proof, small lots, no worm.

At that point, there were only a handful of brands on the market. Since then, mezcal imports have spiked, and labels have proliferated. Lopez now carries thirty. When I visited her at the bar the other day, she was in the midst of a renovation, doubling its size.

My wife once spent a summer in Oaxaca -- during her college years -- she almost ended up staying there. It's a long story, for another time.

So, over the next few months I plan to learn all I can about mexcal. On less than an ounce per week. LOL.

By the way, mezcal with a worm in the bottle is for tourists only, silly rabbit.

[Update, April 22, 2016: I finally got around to tasting Mezcal -- first time in my life. I was looking for a "recipe" but the only recipe I was interested in called for yellow Chartreuse which I could not find at the "only" spirits store in the area. When they carry it, it costs close to $60/bottle and that's why they generally don't carry it. I asked one of the more senior employees -- who says he gave up drinking 25 years ago -- if he knew any Mezcal recipes. He said, "not really." When I mentioned the recipe (tequila/mezcal/yellow Chartreuse) and he did not have yellow Chartreuse, he suggested substituting Triple Sec. And so I did: in a ratio of 1/1/0.5. The first think I noticed was that Mezcal added a Islay-like Scotch peatiness. I was surprised. I immediately google whether Mezcal is like Islay-like Scotch ... and yes, it is googable with 149,000 hits in 0.79 seconds. What a great country.

From Forbes a couple of years ago:

It’s just one week until Cinco de Mayo, and this year I’ll be drinking something different. I’m no expert on artisanal mezcal – until my last trip to Mexico I’d never tasted one. But I’m glad I did, and I’ve been trying them ever since at bars that serve them, which these days is a lot of bars.

Good mezcal is to other popular agave-based spirits (tequila, cheap mezcal) what (most) single malt Scotch is to (most) blended whisky: smokier, heavier and more fiery but also capable of a much deeper, multi-layered set of complex flavors.

In single malts you can get regional influences like salt, iodine, smoke, along with all the complexities added by the wood chosen for aging, from charred American bourbon barrels to recycled sherry, port and Madeira casks.

Because the agave used for making mezcal is roasted in a pit in the ground prior to distillation, the spirit has an inherently smoky character that inevitably draws valid comparisons to Scotch whisky – read a review of almost any mezcal and you will see this reference. While the laws governing the production of Scotch are very strict, the geographic variety and creativity of the distiller still allow for wide latitude in the results. Same with mezcal.

This is probably going to be one of those meandering notes that I wish no one would read. It's not ready for prime time, and probably never will be.

My mind is now exploding with neurons firing on JRR Tolkien's The Lord of the Rings; Beowulf; the proposed new airport for Williston; woman friends; Yorkshire (England); and, "within and without" from The Great Gatsby.

I'm back in my Beowulf phase. I finally sat down last week, before the move, and "seriously" read the translation by JRR Tolkien, and the commentary on that version by his son, Christopher. I finally feel much better about Beowulf.

That led me back to Tolkien and The Lord of the Rings. I won't re-read the entire TLOTR now (or maybe ever) but I will read bits and pieces of it, and will continue to read critiques and analyses of that work.

For those interested, these notes on TLOTR might be interesting. I will now look for evidence to support my "theory" but I think the kernel that led to the idea of TLOTR for Tolkien was his translation of Beowulf. Even if inaccurate, it helps me "connect" the two works; it helps me understand both works better.

At the time I did not know it, but I spent many hours and days walking in Yorkshire, walking in the very same areas that Tolkien walked in the early 20th century.

In a 1955 letter, Tolkien explained to his publisher the origin of one of the legends in TLOTR:
The kernel of the mythology, the matter of Luthien Tinuviel and Beren, arose from a small woodland glade filled with 'hemlocks' (or other white umbellifers) near Roos on the Holderness peninsula -- to which I occasionally went when free from regimental duties while in the Humber Garrison in 1918.


Holderness is an area of the East Riding of Yorkshire, on the east coast of England. An area of rich agricultural land, Holderness was marshland until it was drained in the Middle Ages. Topographically, Holderness has more in common with the Netherlands than other parts of Yorkshire. To the north and west are the Yorkshire Wolds.

From wiki: Roos is a village and civil parish in the East Riding of Yorkshire, England. It is situated 12 miles (19 km) east from Kingston-upon-Hull city centre and 3.5 miles (6 km) north-west from Withernsea, and on the B1242 road.

The mythology (and associated languages) first began to take shape during the 1914 - 1918 war. The Fall of Gondolin (and the birth of Earendil) was written in hospital and on leave after surviving the Battle of the Somme in 1916.

Over the course of four years, I must have walked hundreds of miles in rural Yorkshire. Yorkshire is among the top ten places I would like to explore again; where in the top list depends on my mood. [The top ten include the far tip of Cape Cod; Incirlik, Turkey; Boston; Santa Fe, NM.]

Maybe I'll stop here for now so I can explore the association of Beowulf with TLOTR by reading again, JRR Tolkien: Author of the Century, Tom Shippey, c. 2000.
Posted by Bruce Oksol at 8:00 AM