Random Aerial Photo Of Rigs In The Bakken: The Hagen/White Wells In Banks Oil Field

May 30, 2014: a huge thank you to a "driller" for providing more information regarding this spectacular photo. It came in as a comment (see below) but for better googling/searching, I brought up here:


The small rig (I hate to use the word small but pictures don't lie) belongs to my company and you are correct we are hired to set the initial set of pipe on a well.

Since this is the portion of the well that goes through the aquifer all of the drilling must be done with fresh water and companies have found it to be both cheaper and operationally more efficient to have our rig come in and set this string of pipe than have us move off and the big rig move in and drill the remainder of the well.

With regard to capacity, the rigs are a quite a bit different. I'm using Patterson 308 for this information. The smaller rig vs the larger Patterson 308 rig:


Our rigs are built for speed, to be able to rig up and down quickly and move on to the next hole.

These big rigs are like little cities built to drill for periods of time on the same location.

For what it's worth (and I'm a drilling guy) I think that two of the things that have most helped the shale boom in America are a) pad wells; and, b) rigs that walk (or skid).

The ability to drill a well, pick up everything, and walk to another well, and be ready to drill again in a 4-6 hour period is huge.

If this were like the old days and you had to rig down, move over and rig up again, this would add 5-10 more days to every well not even including the extra costs. The difference in the ability to drill 12-18 wells per year with a rig versus 8-10 in the old days makes a tremendous difference in an Operator's ability to book reserves and get production on line.

The writer makes a very, very good point. I don't know if you all saw it, but in an earlier post this morning, I linked a Q&A with EOG who said it was more "effective" to simply drill a whole new well than re-frack an old well because drilling costs have come down so much. That's huge. When I first started blogging, I don't think many of us would have thought drilling a whole new well and doing it right would be better than trying to re-frack an existing well.  When I read (past tense) that Q&A, my first thoughts: this is a huge win-win-win-win for everyone involved: drillers, roughnecks, royalty owners, investors.

The orange rig is Patterson 308; there are 7 new Hagen wells drilling north. They are testing Middle Bakken and all three benches of the Three Forks. The blue rig is Nabors B22. After drilling a couple of the Hagen Banks wells, it was moved to the location across the road where the "spud rig" was drilling the surface holes for the White wells.

There are 7 new White wells all going south. According to the Oasis conference call, the White wells are closely spaced in the Bakken, and Three Forks 1, 2 & 3. These wells are about 4 miles southeast of Continental's 660 foot spaced Wahpeton wells. The Hagen Banks wells are a south offset to the Statoil Beaux wells which set records for high IP's in the past year.

Also, the Whitten pictures of the Sidewinder 104 rig were taken about 4 miles to the north. This is Statoil's Maston site. It has 8 wells going north under Lake Sakakawea. This pad also has four Johnston wells to the south. These also off-set the Beaux wells.
Just across the water to the north in Williams County is the general area of Kodiak's Wood wells. 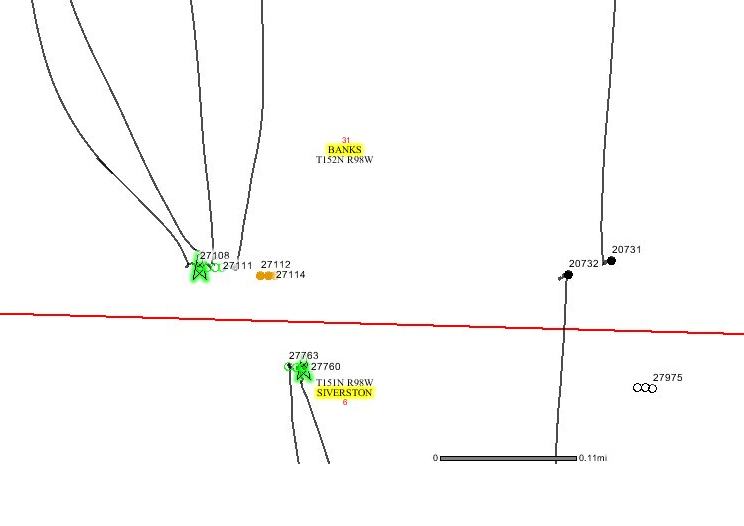 For almost everyone, but especially for newbies to the oil patch, this might just be one of the best photos ever to highlight the difference among the various rigs being used in the Bakken.

Vern Whitten, photo #11 of 30, in the spring "batch" of photos, shows two pads, with three rigs. One rig is the smaller rig, that I assume drills to vertical depth or to below the water table. Vern's caption on the photo says this smaller rig will drill one mile deep; vertical depth is closer to two miles, so if the caption is correct (and I assume it is), this rig will drill below the water table, case the well, and then a larger rig will drill to the "kick-off" point, generally in the Lodgepole, and then push the drill bit two more miles horizontally.

I do not recall ever seeing two different size rigs of such "disparity" either in all my touring of the Bakken or in any photograph. This is really a great photo. For newbies (and really, for everyone) just look at the size of those bigger rigs. They are truly huge. I think this really helps put the Bakken into perspective and what the roughnecks are doing out there.

If any expert wants to provide more explanation/detail about the rigs, readers would really enjoy it.

I tried locating the pads on the GIS map, but there are so many possibilities that I couldn't identify it. In Banks oil field there is one location with three rigs in close proximity but not as shown in the photograph. The photograph was taken April 13, 2014, and obviously, by now, they have probably moved on.
Posted by Bruce Oksol at 7:06 PM