This is the third example in about as many weeks of Bakken operators selling off non-core Bakken assets. This one has to do with SM Energy (a big "thank you" to a reader for noting it).

First, it is important to point that, at least for the time being, SM Energy remains interested in the Bakken. From the 1Q14 earnings conference call:


First, we had a good start to the year, and we are executing well on our 2014 business plan. In the first quarter, we came in at the top end of our production guidance range and we performed well on most of our guided cost metrics. Our plan for 2014 include a conducting a number of inventory enhancement tests in our core Eagle Ford and Bakken/Three Forks programs, and we are following through with this plan.

In the Bakken/Three Forks, we plan to conduct a number of tests beginning in the second quarter that include completions with higher sand and fluid volumes, downspacing tests in East Raven and testing new Bakken intervals at Gooseneck and Stateline. It will take some time to get results from all of these tests, but we expect that they will further improve the economics of both our Eagle Ford and Bakken/Three Forks programs and increase our inventory meaningfully in these plays.

Moving to the Bakken/Three Forks play on Slide 8. I think most of the investment community is aware that this winter was pretty rough in the northern Rockies. Some of our activities there, particularly our completion work, were impacted from a schedule standpoint. We completed 12 gross wells during the quarter, but later than we expected, which is the reason our rate in the Bakken was flat sequentially. In general, our assets are performing well and we're optimistic about proving up additional economic drilling inventory in the Bakken/Three Forks this year, as Tony previously discussed.

But then in the Q&A:

Comment: $50 million seems like a significant amount but perhaps it was going to be presented in the second quarter after it closed.

Comment: $50 million seems like a significant amount but when one looks at the company's graphic of their acreage in North Dakota, it doesn't look particularly significantly. I can imagine the CEO/COO not giving much thought to the sale. From slide 12 of the March 24, 2014 presentation: 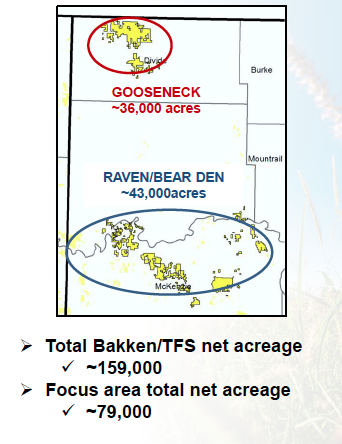 Of course, what is not shown is where the "other" acreage was that was sold. 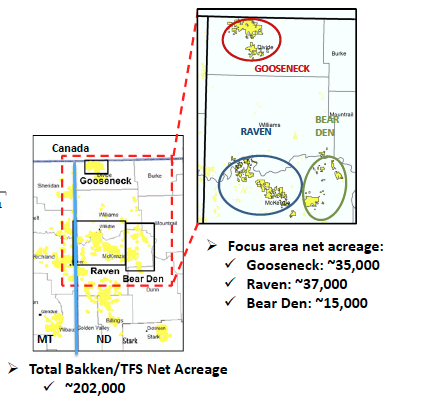 Note the solid vertical blue line: that is the Montana/North Dakota state line. At the end of 2011, the company had about 202,000 acres in the Bakken. Sometime between then and the end of 2013, the company had whittled its Bakken acreage down to 159,000 acres (including the sale of the Bear Den acreage). [Between the two presentations, SM Energy picked up a small amount -- 7,000 net acres -- of new acreage in their focus areas, the Gooseneck and the Raven.]

I have to run. I will update this later. But this provides a bit more detail on the SM acreage and the most recent conference call.
Posted by Bruce Oksol at 3:20 PM