Australia, As Predicted, Experiencing Brownouts And Blackouts Because Consumers Are Using Too Much Electricity -- January 28, 2018

So, here it is, as predicted by a reader of the blog: brownouts and blackouts in Australia. From the article:

“There are a lot fuses blowing in the hot weather and a significant power pull with people having put in air-conditioners they didn’t tell us about,” Mr Armstrong said.

Who knew you needed to tell your power company when you put in an air conditioner?

"ISO Australia": Spot prices for Victoria, South Australia, and Tasmania -- note the spot price for electricity earlier in the day, in excess of $3,000/MWh -- 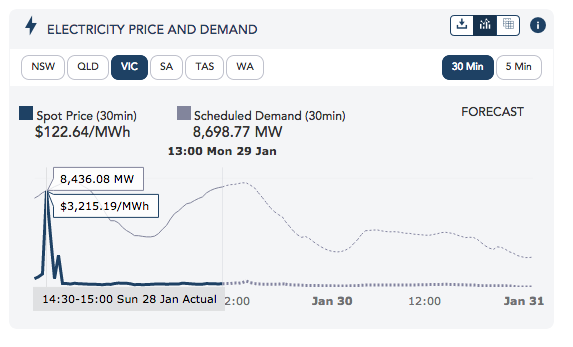 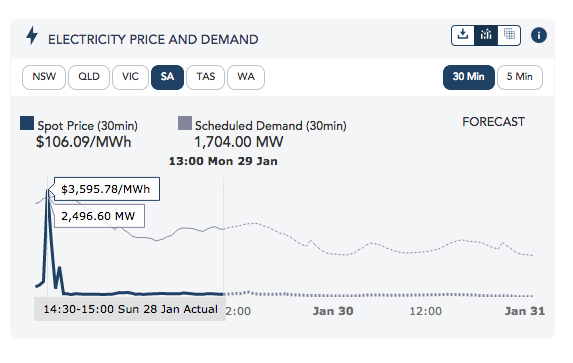 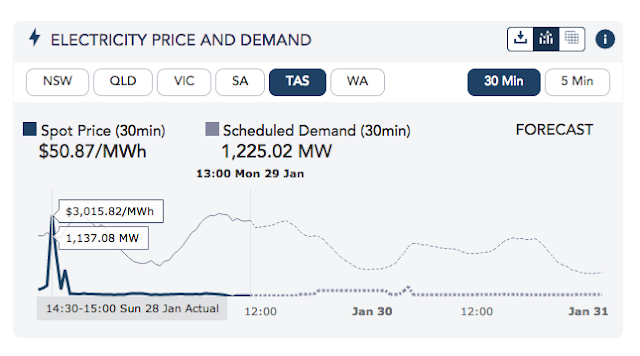 There is no question in any sentient American that we would have been headed down the same path had Hillary been elected president.


If power prices hadn't spiked I would accept the "official" explanation that it was a local distribution system problem... transformers/conductors too small resulting in overheating and open fuses. Doesn't sound right does it? My hunch is low voltage from lack of on line capacity caused current to increase and open fuses. Sure, once these fuses opened they had sufficient power on the grid (load shedding).


Bull feathers...the junk power coming from all those wind turbines would make any system "blow fuses". It must be nearly impossible to maintain a stable electrical grid with a major component of wind power.

It's not just the varying wind speed that makes the output power nasty...see below: IEEE lists seven (7) power "disturbances". All seven of these are more of an issue with a variable, intermittent, on again off again wind generator than a conventional coal or gas generator. Example: Compare 500 wind turbines at two MW each vs. a coal-fired 1000 MW generation station...7x500 potential "disturbances" for the wind mills vs 7x1 for the coal-fired unit!!!

The reader quotes this from the news article:


The variable nature of wind energy sources (in terms of the real power, reactive power, output voltage, and frequency) is a major challenging issue.

Note 1: These power converters use diodes and filters to convert the AC from the generator attached to the turbine to DC. This is necessary to smooth the constantly changing generated current. Then the DC current must be inverted to AC to be compatible with the electrical grid.

Note 2: See below item 5 (for example). Waveform distortion...some of this DC from the converter/inverter will certainly leak into the AC output as the diodes age and fail...believe me I've seen diode leakage/failure problems for 30 plus years maintaining AC to DC rectifiers on pipeline cathodic protection systems.

Wind? The gift that keeps on giving.
Posted by Bruce Oksol at 9:28 PM