Hedge funds unwound bearish bets at the fastest pace in 10 months as fear of oil sinking to $20 a barrel faded.

A lot has happened since Goldman Sachs Group Inc. made that forecast a month ago. Some U.S. shale drillers have thrown in the towel after a year of maintaining supply in the face of plunging prices, saying they’ll pump less in 2016. Saudi Arabia, Russia and other large producers have frozen output and plan to meet later this month to discuss further measures to support prices.

Members of the Organization of Petroleum Exporting Countries intend to meet with other producers between March 20 and April 1, Russian Energy Minister Alexander Novak said on Russian state television March 4.

Prices climbed even as U.S. crude supplies increased by 10.4 million barrels in the week ended Feb. 26 to 518 million, according to the EIA. That’s the highest level since 1930.
"The market is ignoring the builds in U.S. supplies," said Phil Flynn, senior market analyst at the Price Futures Group in Chicago. "The market is starting to realize that there will be a production freeze if not a cut. The mood has changed."

Original Post
This is going to be one of those meandering posts that certainly is not ready for prime time. I guess the best way to read this post is to imagine four people sitting around Friday night discussing the price of oil and it's mostly "group think." There's no one in the group arguing against the single theme running through a very disjointed conversation.

A reader sent me an e-mail earlier today suggesting once the price of oil starts moving up, it may move up quite quickly.

I think it's wishful thinking, but putting together a few things arguing his/her position and a few things I think about every day, one wonders if the reader might not be right.

It's hard to put these random thoughts in serial progression because many of these thoughts run parallel.

1. Look at the graph depicting the cash reserves of Saudi Arabia. Sure, they still have a lot of cash, upwards of $600 billion but look at how fast the reserves are falling. The graph only goes to January, 2016, but not a lot has changed in February or March, suggesting that SA reserves will continue to fall. This has to incredibly scary to Saudi Arabia. If nothing changes in the price of oil the entire calendar year of 2016 (as many analysts suggest), Saudi's cash reserves will be in free fall.

2. Russia faces similar problems though Russia has a different economy than Saudi Arabia's.

3. It was tweeted earlier today that OPEC and Russia have agreed to meet sometime between late March and early April.

4. Operators have slashed their CAPEX for 2016. Mid-year, operators could re-adjust upwards but right now, everyone in the oil industry knows the amount of money that will be spent for E & P this year, and the cuts were spectacular, ranging from 25% to 60% among operators.

5. Large projects needing a longer lead time were canceled or deferred last year. Even when the decision is made to go back to those large projects we won't see any production for years.

6. Despite the success of the US shale industry, the US still imports 5 million bopd -- that was the old 30-second sound bit. We've now seen that the current number is 7 million bopd.

7. If the Bakken production in January, 2016, comes out as low as predicted, it will get traders' attention.

8. Traders generally and historically look out six months. With all the huge, long-lead projects cut or deferred in 2015, one wonders if they might not be looking out 18 months. And 18 months out, looks a bit dicey with regard to supply.

9. If OPEC and Russia meet sometime later this month, but come away with no deal, leaving spigots wide open, both OPEC and Russian know that the price of oil will plummet; it's only a matter of how low; how fast.

10. The reader suggests that if US shale production drops significantly in the January, 2016, data; and if Russia and OPEC come to any "meaningful" agreement, things could start moving quickly.

11. $40-oil sounds good to some in the US shale industry, but $40-oil, $50-oil, $60-oil (which sounds really good to the US shale industry considering what they've been through) doesn't do anything for Saudi Arabia and probably not much for Russia. So, I can't imagine Saudi seeing much difference between $40-oil and $60-oil. Their cash reserves simply won't fall quite as fast. They need $100 oil, sooner than later.

All of this depends on the global economy -- that's an entirely different story -- but for me this is the bottom line: for those who think the price of oil is trending upward, the reader thinks that once it starts moving, it could move much more quickly than people currently think.

I keep coming back to two things:
Yes, those are two different points.

If the tweet earlier today was accurate that OPEC and Russia will meet, they have to know that "no deal" will result in oil prices dropping again, and Goldman Sachs forecast of oil in the 20's is again very possible. It's hard to believe rational negotiators would want to leave that meeting with "no deal" but I'm not sure we are dealing with rational players.

The point is this: the reader who wrote me today suggested that the price of oil will move up more quickly than people currently imagine. I think that's true regardless which way the price of oil moves.

So, just for the fun of it, what does history have to say? From macrotrends: 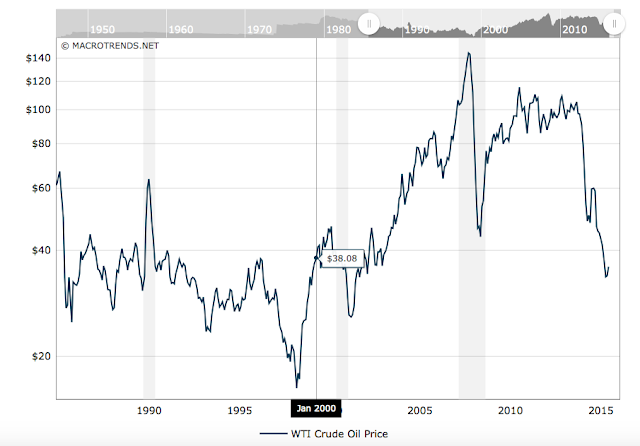 For the past 30 years, once the price of oil starts moving up or down, it tends to move very, very quickly.

It will be interesting to see if that remains true in spite of the US shale revolution.

Anyway, a big thank you to the reader for giving me a reason to ramble.

For the upside:
For the downside: