Calumet Has Completed Its Expansion At The Great Falls, Montana, Refinery -- February 19, 2016

The refinery’s 25,000-b/d crude unit is now on stream and scheduled to reach full operating capacity by the end of March, 2016.

Initially intended to lift crude processing at the refinery to 20,000 b/d from its original 10,000-b/d capacity, the $400-million expansion also was to include installation of a 25,000-b/d mild hydrocracker (MHC) to convert gas oil to higher-value distillates, a hydrogen plant to support the MHC, and a treatment unit to handle increased fuel gas production from the MHC.

Alongside expanding overall capacity, the crude unit is designed to process heavy sour crudes to enable Calumet to benefit from nearby access to cost-advantaged heavy Canadian crudes.

Years ago when traveling cross-country, I passed through Great Falls. The amount of oil-truck traffic intrigued me; I did not know why; now I know. Great Falls is another city that would fascinate Ayn Rand.

From a recent presentation (2016) by Calumet: 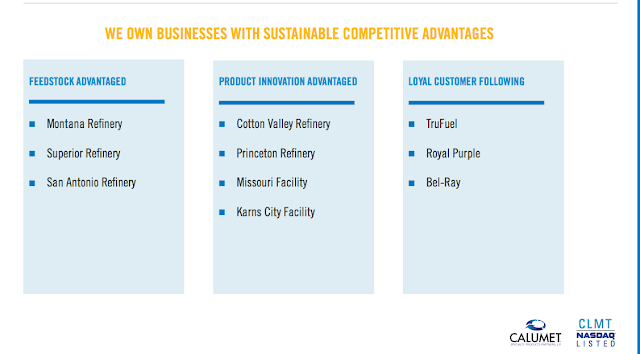 Keep the graphic above in mind when you read the following excerpts from MDU and Calumet 4Q15 transcripts:

From the 4Q15 transcript for MDU:


Our refining segment includes the company's 50% interest in the Dakota Prairie Refinery which began commercial operations just in May of last year. Our share of 2015 refining results is an adjusted loss of $20.5 million. Earnings were impacted by unplanned outages in October and November due to equipment problems that have since been repaired. Economics have also been affected by historically low Bakken differentials from the West Texas Intermediate pricing, which has reduced the discount for our oil feedstock.

In addition, reduced oilfield activity in the Bakken has decreased the demand for diesel fuel along with the slowdown in Canadian tar sands development has also reduced the demand for naphtha. Our share of projected 2016 EBITDA is at a minus $25 million to zero. As we talk about our overall guidance for 2016, you will see that refining has been moved from the pipeline business to a separate segment. This will provide investors with transparency both on the refinery and the value of our regulated pipeline business.

We're excluding it from adjusted guidance because the refining industry tends not to give earnings guidance due to the volatility and unpredictable nature of the key commodity assumptions supporting its financial results. We believe this approach to adjusted EPS allows for a narrower, more meaningful range for investors, while still providing sufficient guidance for investors to evaluate the refining segment. We are initiating 2016 adjusted guidance in the range of $1 to $1.15 per share. Adjusted earnings guidance includes results from the utility, pipeline, and midstream and construction businesses.

GAAP earnings per share guidance, which includes results from the refinery, is expected to be in the range of $0.85 to $1.10 per share.

Q: On the refinery, I know market conditions have been tough there. There seemed to be lot of moving parts, though, this quarter, and in terms of the unplanned outages, is there a way we can think about the drag on earnings this quarter for that segment?

A: Yes. Brent, we were down almost approximately a month. It was all related to the hydrogen plant and we are past that. We're probably going to have some issues with our vendor on that plant, but ultimately we think we've got that handle. So, on a go-forward basis we're really happy with where operations are in terms of operating the plant day-to-day. I would characterize what we put out there as a 90% target in terms of about 21 days maybe for the year outage, and so that's the guidance. I hope that helps.

Q: Okay, and then a follow up, and excuse me if this sounds like a stupid question, but you mentioned the guidance includes an expectation for 90% utilization in 2016. I guess that just seems high to me given kind of the demand outlook. I guess why would you expect it to run at these levels or why does it make sense to continue running at these levels if we're going to continue to see losses?

A: Well, there is still a margin on diesel. It's not as robust as it was. So ultimately that is – as long as there is a margin we will continue to operate at a percentage. If we don't see it, we would obviously take it down. Our marketing group has also been having some success taking some diesel out of the basin also. So we think that over the whole year period, we think we'll probably be able to attain those levels, but obviously one of the things you see in our guidance is we have given a range based on pricing because that's one thing we've learned over the years we can't control, and so you've got to operate as well as you can and react to when it's there. So, obviously, if we are having negative pricing, we would turn down the plant.

Q: That's helpful and I guess it would also be helpful to get your current thoughts kind of longer term strategically thinking about how the refinery fits in with your longer term plans?

A: Yeah, obviously longer term – short-term, we are working on optimizing where the plant is at. Longer-term, you know this is a business you have to get in on scale, not just one refinery, you have to have several or else you would exit. Obviously, we may not be the right long-term owner but at this point that decision hasn't been made.

From the 4Q15 Calumet earnings transcript:

Regarding the Dickinson refinery:

We do have local niche markets that we believe we are advantaged for in the long-term. I think what we saw in the fourth quarter was as the Bakken drilling was the slowing down, as diesel demand continued to drop in that North Dakota region, obviously that impacted our DPR Refinery significantly. We also saw some carry on effects in both our Montana, and specifically our Superior refiners.

So what’s happening is as diesel demand was extremely high one or two years ago, it was pulling diesel in from those out of state markets, and as the diesel demand started coming back in, what we saw was a backing up of the diesel back into those respective production areas. And so we saw a significant drop in the fourth quarter at both our Superior racks, as well as our Montana rack. As we continue to launch that, we've seen that the inventory is starting to clear, and the Superior racks in particular have rebounded significantly here in the last week or two. So we’re hopeful that as the inventory has been run off, that we’re going to return back to the more typical supply demand balances that we have seen in those local regions.

Let's start with the last one on Dakota Prairie. You know, clearly that has been weighing on our earnings in the fourth quarter as the Bakken field has slowed down significantly. We've made several -- we've taken several steps to improve the profitability of that operation. Remember in the first place that we just started that plant up in the middle of last year, and as we work through some of the startup kinks, I think we're in a position now where our reliability has been significantly improved, and we hope to be able to realize an improvement 2016 based on that improvement.

We have also taken some leadership changes, just to be frank at the plant, and we think that has made a significant change. We've already seen the difference here in the last couple of months. And one example of that is we were running a diesel yield at the plant somewhere in the 32%-33% range, and after we brought in some additional resources from some of our other assets that were more familiar and experienced with distillation columns, we were able to make some significant moves to increase our diesel yield to 44% or in that range.

So those are some of the significant opportunities that we believe we still have to take at our Dakota Prairie refinery. Our objective is to be cash flow neutral during this bottom of cycle condition. I would tell you we're not there yet, but we have many more steps that we're trying to execute on today to get us into that position. At that point, once we become cash flow neutral, then the role that an asset like Dakota Prairie refinery has in my portfolio is it's a call. It's a call on future increases in crude price, and that has some value in my portfolio.

So when I say we have a vision of becoming a premier specialties petroleum products company in the world, what I mean is going forward that's what we're going to be focusing on in terms of our growth strategy. It doesn't mean we're going to try to fire sale any of our assets that are currently in our portfolio, because they do have value to me. However, in the event that someone else views any one of our assets in our portfolio with a higher valuation than what we view it at, of course we would consider selling that asset. That would include any of our field assets, any of our specialty asset, any of our oil sub services assets to the extent that it has higher value to someone else because their portfolio has different synergies or competitive advantages that could take advantage of that asset, we would certainly consider moving that asset out.

And what I would say Christina, is in the past I don’t think we really held that view. We pretty much held on the assets until like they were in our portfolio for good. And I think what I'm bringing to the discussion now is an openness to say hey, maybe other people view these assets at a higher valuation than we do. So that's our philosophy going forward.

Now, go back to the graphic above. Note that the MDU-Calumet refinery in Dickinson is not even listed. Not listed. Not loved. Just a matter of time for ...


It's Just a Matter of Time, Brook Benton

Perhaps it's just me, perhaps it's just this recording, but all of a sudden I long for the good ol' days when we had the 1950's wooden cabinet "hi-fi" and the vinyl records.  And the living rooms the children were not allowed to go into.
Posted by Bruce Oksol at 10:46 AM