Over the past few years, two of the fastest-growing cities in the U.S. are Midland and Odessa, a pair of communities separated by a mere 20 miles of interstate roadway deep in the heart of Texas.

These metropolises have not only seen their populations swell to previously unforeseen numbers, but Midland and Odessa also rank first and second, respectively, in terms of economic growth nationwide. The fact that these two areas have seen this type of expansion is no accident. Growing a city is like growing a business, and growing a business is all about location, location, location. Midland and Odessa have this advantage, as both sit atop the Permian Basin, one of the largest oil reserves in the world.

“The Permian Basin is arguably one of the most, if not the most, important regions when it comes to energy production,” says Bradley T. Ewing, a Rawls Professor of Energy Economics at Texas Tech University. “It has the greatest rig count of any basin or region in the world.”

The activity that both areas have seen in energy production – and the subsequent population boom each city has undergone as result – is proof that safe and responsible oil and gas production not only lowers energy and fuel costs for consumers, but that it also harvests economic stability, strengthens national security, increases median household incomes, and improves American competitiveness worldwide.

According to a report published by Texas Tech University, the total cumulative production for just the Texas portion of the Permian Basin exceeds 29 billion barrels of oil and approximately 75 trillion cubic feet of natural gas. Much of this production comes courtesy of enormous improvements in technology such as fracturing and horizontal drilling.


U.S. shale producers have responded even more quickly to lower oil prices than analysts expected, which should ensure shale production hits a plateau by May or June and is sustained rather than falling in the second half of the year.

The number of rigs drilling for oil in the United States declined by another 84 last week, according to oil field services company Baker Hughes. The oil-directed rig count has now fallen by a total of 553, or 34 percent, since early October, the fastest decline since 1986.

Some analysts have questioned whether the decline in rig counts will really result in a slowdown in oil output. The most basic lower rigs, those with the lowest horsepower and depth ratings, capable only of drilling vertically, are likely to be idled first, leaving more powerful units with horizontal capability still working.

And drilling will pull back from speculative frontier areas to concentrate on the most productive parts of well-established plays to maximise new output per well drilled. But however the data is analysed a broad-based slowdown in drilling is now occurring across the entire U.S. shale sector.


Kuwait's oil minister said on Monday he expected the current oil price rally to continue into the second half of 2015 as the global supply surplus shrinks.

"I think it will last," Ali al-Omair said of the recent rise in oil prices, speaking on the sidelines of an energy event.

"It will start holding gains now and hopefully in the second half of 2015 we will see better prices," he told reporters. Omair also said the current oil surplus was "definitely lower" than 1.8 million barrels per day.

"The surplus is now reducing and some of the production is getting out of the market," he said without elaborating. Oil prices steadied on Monday with benchmark Brent trading up 3 cents to $61.55 per barrel by 0620 GMT.

As I predicted right here on this blog a couple of days ago, the opportunity to enroll in ObamaCare has been extended by one week. The extension was due to "technical issues" with the federal website.

Photo of this year's indoor soccer championship team -- for their age group. Undefeated. 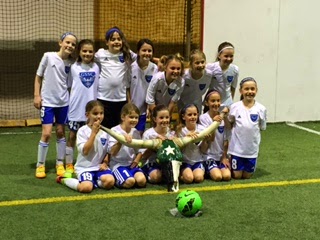