This is the kind of information I used to provide when I first started the blog. Over the years I fault myself for not doing more analysis. I got lazy, simply aggregating and reporting stories. Posting day in and day out gave me a really good feel for what is, and what was, going on in the Bakken, but I let readers down by not providing an analysis. By posting a summary of the monthly dockets I got a feeling for how fast the Bakken was moving. A reader provided the following which shows how fast the Bakken is moving. For newbies, it is important to remember that back in 2007 when the Bakken boom began in North Dakota, folks talked about one well per section; and, the sweet spots in the Bakken had not been determined. CLR's Eco-Pad was seen by many as revolutionary. This is how the reader captured the velocity of the pace of change in the Bakken:

In Friday's "permit section" you raised a question regarding the pad for Continental's new 21 Jersey wells in SENE 6-153-93 of Alkali Creek.  On November's dockets Continental requested authorization for 30 wells on this 2560-acre spacing unit, sections 1-12-153-94 and 6-7-153-93.  This past September they got permits for 14 Linfield wells on this same pad; these permits were canceled a week ago.
Continental's nomenclature indicates the Linfield wells were all Middle Bakken or Three Forks wells, while the Jersey wells appear to be spread among the Middle Bakken and Three Forks 1, 2 and 3 benches.   Regardless of whether Continental limits the spacing unit to these 21 wells, or adds 7 more which would put them in line with their current 4-section, 28-well configuration, on Thursday, March 13 the Nabors 1 rig began drilling the Jersey 29-6H well on this pad.  This is the first well drilled in the spacing unit.

Continental also has a "virgin" 2560-acre spacing unit immediately to the west, sections 2-3-10-11-153-94 in the Elm Tree field.  This will be drilled from the south side of the river, and I assume Continental will put another 21 or 28 wells there.
To the north Continental has an adjoining, "virgin" 1280-acre spacing unit, 25-36-154-94 on the east side of White Earth Bay.  This is a pdf showing a snippet of the NDIC GIS map which covers this area. 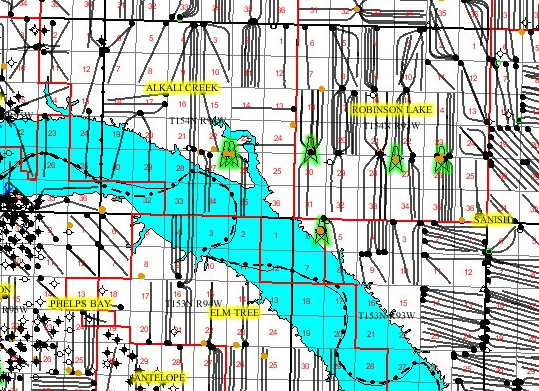 The Bakken's rapid increase in well density is mind-boggling.  As noted above, in April of last year Hess planned to drill 9 wells in the 1280-acre spacing unit, 26-35-154-94, and just nine months later, on the January 2014 dockets they requested 17 wells in the two-section spacing unit, 15-22-153-93, which is about 3 miles southeast down the lakeshore from Continental's Jersey pad.

On the November dockets Oasis requested 21 wells in all their Alkali Creek 1280-acre spacing units and all their Robinson Lake 640- and 1280-spacing units.

You noted  in February Oasis requested 21 wells in a 640-acre spacing unit, 4-153-93 in the Sanish field, two sections east of the Jersey pad.  EOG has been  requesting 34 and 36 wells on spacing units of varying sizes, Continental is forging ahead with their increased densities of 14 and 28 wells, and other operators have similarly increased their well densities.  This is occurring in many areas of the Bakken.

When I step back and look at these three Continental and two Hess spacing units, adjoining 14 sections (discussed above), they were all blank -- white board, "virgin" until the first well, the EN-Leo H-1 was completed just before Thanksgiving.  Now 30 wells are somewhere in process from producing to permitted.

Then think about this. Each well averaging about $10 million (in round numbers) x 100 wells = $1,000 million or more simply $1 billion, just for the drilling in five spacing units.
Posted by Bruce Oksol at 8:57 PM