The "mainstream" analysts are catching up with two phenomena in the Bakken that we've been discussing for a long, long time: the "halo" effect" and infill density.

For recent commentary on the former, see this link.

For infill density, see this screenshot from twitter today: 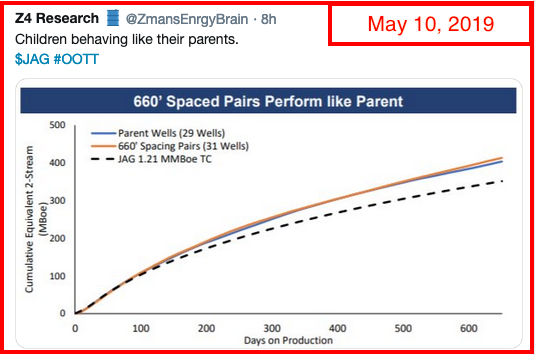 Wow, CLR brought up this issue years ago and I've posted too-many-to-count graphics on infill density -- years ago. And now we're starting to see "mainstream" analysts do some good statistical research.

For newbies, this was the concern: that daughter wells -- new wells -- would diminish, negatively impact, even perhaps "ruin" existing wells, or "parent wells. I think a lot of folks in North Dakota at the beginning of the boom expected to see one well in every section (640 acres). Many were surprised to see as many as four in a one-mile square, but then to see reports that there could be as many as 24 wells (or more) in a 1280-acre drilling unit was beyond the pale.

Folks with nice wells were legitimately concerned that new wells placed too closely to these existing nice wells would "hurt" the old wells.

Anecdotally, I was seeing just the opposite and I posted any number of blogs about that.

Now we have a "professional" providing more than just anecdotal evidence.

Look at that graphic. We're talking 660'-spacing. Instead of placing horizontal wells one mile apart, operators are seeing no adverse impact even placing the wells 660 feet apart.

In fact, if one looks closely, the daughter wells are doing slightly better than parents wells but I doubt this is statistically significant. Without seeing the study itself, I assume this is from the Permian. Z4 tags "JAG" -- a Permian operator.

Wow, I can't remember how many years ago -- maybe 2009, 2010 -- I noted that fracking was effective 500-feet radially -- meaning that horizontals could be placed 500 to 1,000 feet apart. I may have this wrong, but at 660-feet spacing, if the horizontals are 660 feet from each other, it suggests fracking is most effective 330-feet radially. We're talking horizontal through the seam because vertically things are affected by different geology: dolomite (sand) in the producing seam; shale (rock) in the generating seams.