We Might Have An Explanation For Why Gasoline Demand Is Slumping In The US -- The Jobs Numbers Don't Add Up -- January 9, 2016

January 11, 2016: Don sent me this note; he knows I don't have cable television so I am unlikely to see CNBC:


A broker on CNBC earlier today said that gasoline consumption should be going up, because the price is dropping. Instead gasoline consumption was going down during most of 2015, and that trend continues in 2016. The broker still maintains that the people are driving less and saving cash / or paying off bills.

On January 7, 2016, I pointed out a "huge disconnect" between the health of the economy based on employment numbers provided by the US government and the surprising drop in gasoline demand. If everybody is back working, which the government suggests, and gasoline is about the least expensive it has ever been, gasoline demand should be soaring. It's not.


In some gas stations around the country, the price of a gallon of regular has dropped below $1.42. AAA and GasBuddy, two organizations that follow gasoline prices, say that gasoline prices below $2 will not be unusual in most of the United States.

As oil prices fall, and refinery capacity stays strong, the price of gas could reach $1 a gallon in some areas, a level last reached in 1999. The entire states of Alabama, Arkansas, Missouri, Oklahoma and South Caroline (sic) have gas prices that average at or below $1.75.]

*******************
At the graph at the link above, and also shown below, one can see how striking the drop in gasoline demand actually is. It has to be very concerning that the demand for gasoline has fallen off a cliff compared to just one year ago. It doesn't add  up. 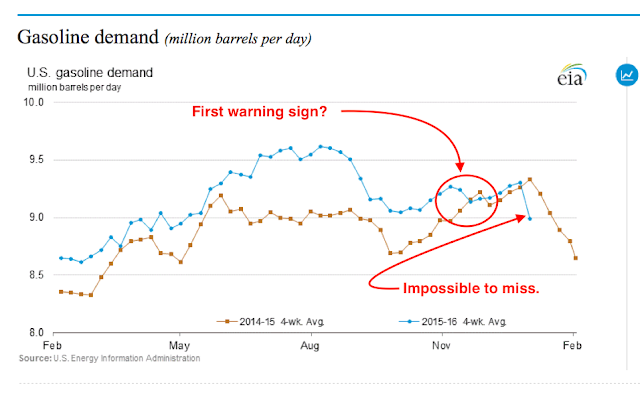 So what gives? Don provided a likely explanation. The jobs data doesn't add up.

The "gasoline demand" numbers are not "adjusted" as far as I know. The employment numbers are "seasonally adjusted."

David Stockman is reporting that the great jobs numbers reported this past Thursday and Friday were "bogus."


Here’s a newsflash that CNBC didn’t mention. According to the BLS, the US economy generated a minuscule 11,000 jobs in the month of December.

Yet notwithstanding the fact that almost nobody works outside any more, the BLS fiction writers added 281,000 to their headline number to cover the “seasonal adjustment.” This is done on the apparent truism that December is generally colder than November and that workers get holiday vacations.

Of course, this December was much warmer, not colder, than average.  And that’s not the only deviation from normal seasonal trends.

The Christmas selling season this year, for example, was absolutely not comparable to the ghosts of Christmas past. Bricks and mortar retail is in turmoil and in secular decline due to Amazon and its e-commerce ilk, and this trend is accelerating by the year.

So too, energy and export based sectors have been thrown for a loop in the last few months by a surging dollar and collapsing commodity prices. Likewise, construction activity has been so weak in this cycle — and for the good reason that both commercial and residential stock is vastly overbuilt owing to two decades of cheap credit — that it’s not remotely comparable to historic patterns.

David Stockman may or may not be correct. I don't know. But it certainly explains why "gasoline demand" has slumped significantly.

On another note, this is the first year that ObamaCare is pretty much fully "developed." All things being equal, employers should be looking for ways to cut the number of employees rather than adding a huge new expense.

Also, seriously, with the job destruction occurring in the oil and gas industry, did anyone really think that there would be a record number of jobs added in December?

The jobs numbers don't add up and Stockman explains why.
Posted by Bruce Oksol at 7:19 PM