This is not an investment site. Sweet and short.

For folks with a long horizon, and an automatic dividend re-investment program in SLB, this might be the best of times. Schlumberger announced a dividend of 50 cents, unchanged from the previous quarter. Here is the two-year history of SLB dividends:
Even farther back:
Easily beats estimates, 88 cents vs 79 cents.

“Despite the much more challenging market conditions, overall pretax operating margins were maintained at levels well above the previous downturns as we continued to proactively manage costs and resources, carefully navigate the commercial landscape, and further accelerate our transformation program. The success of our efforts can be seen in pretax operating margins of 10.2% in North America and 24.5% internationally while generating $1.5 billion in free cash flow, representing 132% of earnings.

“In the first half of 2015, year-on-year revenue dropped 26% in North America and 14% internationally. In spite of these declines being more severe than those of the 2009 downturn, we delivered first-half decremental margins of 37% in North America and 18% internationally. These results represent a marked improvement over the equivalent figures that were both in excess of 70% for the same period in 2009.

After blowing off the IMF, Greece paid back the IMF the $2 billion the country owed the "bank."

Third downgrade in a month:


Tesla is just not feeling the love from Wall Street, with UBS on Tuesday becoming the third investment bank this month to downgrade the electric sports-car maker's stock.
Tesla's shares fell as much as 5 percent in early trading after UBS analyst Colin Langan cut his rating to "sell" from "neutral", saying he expects the company's car sales and home battery sales growth to disappoint.

Tesla shares are pricing in deliveries of more than 1.5 million vehicles in 10 years and full utilization of Tesla Energy's capacity, said Langan. He says both scenarios are unlikely.

A UBS analysis indicates Tesla's planned 15 gigawatt of storage capacity may be larger than the market demand by 2020, Langan said.

The company is burning through cash, and it took a consortium of seven banks to put together Tesla's most recent bailout of $750 million.

I think if Tesla requires another $500 million to $1 billion bailout before July, 2016, it will speak volumes of how Tesla is doing.

Wow, talk about a beautiful evening, despite being 91 degrees at 9:30 p.m. Almost fully dark now and the sky in incredibly clear: most striking, of course, to the west is the crescent moon, Venus to the right, and Jupiter to the right of Venus. The high tomorrow will only reach 99 degrees.

I just got back from my evening bike ride; stopped by the store to pick up a few items. Yesterday the grocery store where we normally shop had no whole chicken fryers -- for my beer can chicken -- so I had to go to another grocery store in the neighborhood. They had a few but very few. Tonight, I see our regular grocery store has a small number of whole chicken fryers. At Albertson's where I got the chicken yesterday, the price was 99 cents/pound. A local chain, Minyards, our regular grocery store has them for $1.59/lb. At Albertson's a typical fryer cost about $5.49; an "organic" fryer cost somewhere between $11 and $12.

I assume most folks are aware that Starbucks has increased the price of their drinks by 5 cents to 20 cents. A small ("tall") Starbucks coffee now costs $2.00 here in the Grapevine area. We now have Peets in the same neighborhood so we now have options. At Minyards, off the shelf, a 12-oz bag of ground Starbucks is $9.79; Peets is $7.99. Something tells me that the Peets I bought tonight will taste the same as the Starbucks I used to buy.

For the archives, the books I am reading (some for the 2nd or 3rd time because I have a bad memory, and always see something new in books I re-read): two books on dinosaurs; Richard Dawkins' The Ancestor's Tale; and, a biography of J. D Salinger.

Somewhere along the line I completely missed this; it's pretty much been true since at least mid-2014: al-Raqqa  (Syria) is the new capital of ISIS. They say it's a 12-hour bus ride from al-Raqqa to Beirut.

As fast as ISIS is moving, they may have their own country before the Kurds get theirs. 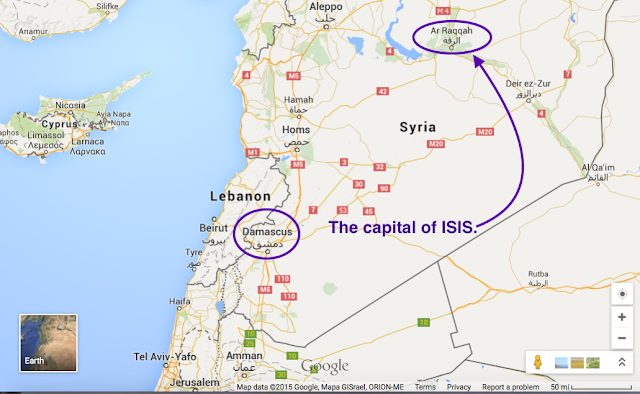 I desperately need a music video but the one I want to post has been seen too many times on the Million Dollar Way. Whatever I end up posting will be my #2 choice.


I've Got To Get A Message to You, The Bee Gees


Without question, the most difficult evening of the week throughout my life has been Sunday evening. It is an incredibly bittersweet evening for me.
Posted by Bruce Oksol at 12:42 PM