Women In The Bakken -- Just A Casual Observation

I had an extended visit back in 2011; I have been back several times since 2011, but for shorter visits. I consider 2011 a "base year" in the Bakken for me: I was here for about three (3) months, actually working in the Bakken then, and I got to know it fairly well. I tend to compare what I see now with what I remember from 2011, though I have been here several times since then.

I'm sitting in a coffee shop on Main Street. There is seating for about 40, probably about the size of typical Starbucks. It's somewhat nicer than the standard Starbucks: there is more comfortable seating. It is fairly quiet -- which is a very, very good sign. It means there are a lot of coffee shops available around town. Folks aren't waiting for an hour at McDonald's for a cup of coffee like they were back in 2011 (slight exaggeration, but it was a very, very long wait, I recall).

Of the ten folks in here right now, there are four women. Three of them customers.

Something else we are seeing a lot more of in Williston: families. I was told that when they had the open house out at the Williston Area Recreation Center, some folks were surprised at the large number of children, particularly teenagers.

By the way, the capacity of the Williston Independent School District is 2,500 students. When I was going to school here in Williston, there were about 2,300 students in the district; the low point was 2,100 students during the 80's, I believe. Right now, there are about 3,100 students, and the projections are to go to 4,500 students over the next few years, peaking out about 5,000. (In 2030, I think the estimate actually goes to 6,500.) I'm doing that from memory and could be wrong. I do know the 2,500-capacity number is correct, but I could be off on the current enrollment figures.

The city will vote in June on whether to build a new high school, replacing the "man student camps" that are now being used to educate Williston students from kindergarten through high school. The "student camps" are portable trailers in and around the various fixed facilities. A new high school is a no-brainer. The land (30 acres, overlooking Williston) was donated. The cost would be less than 3% of the Legacy Fund as it stands now. But the Legacy Fund, paid for by oil royalties out of the Bakken, is off limits. Three percent.The bond issue to pay for the new high school (and mandated security upgrades at the six or so elementary schools) will raise what it would cost to drill three or four wells. The city voted "no" the last time this came up. Meanwhile, the school district will pay $9 million/year for the student camps until when/if a new high school is opened. I could be wrong on the cost figures but I think that's what I heard.

But I digress. I was making an observation about the ratio of men to women in the Bakken oil patch. It's getting better. I think it's still about 9,000 to one. I am not including men or women that are not in the labor force.

Another observation: things have spread out. Yes, the roads are still congested on the main thoroughfares. But the truck stops are now relatively empty compared to two years ago. The trucks, when not on the road, are now found on several new truck yards and countless new industrial parks. Companies who were situated on an acre of land two years ago have spread out and now have parking lots that measure in acres for trucks.

There's a lot more cement and asphalt surfaces on which trucks sit and ride. Two years ago, trucks were seen everywhere, hub deep in muddy fields. Now, new thoroughfares are wide, and new huge parking lots in the industrial areas are everywhere. It simply looks a whole lot more organized; a whole lot better when it comes to truck traffic.

Contractors are working from early in the morning to late into the evening. The other night I noted there were no center markings on the road I was on; it was a bit sporty. I took my dad out to see that road the next morning. The lines had just been painted. They must have done it during the night. I was on that road at 9:00 p.m. and I was showing it to my dad the next morning. Sometime in between they had painted the center lines.

The city has done something with the traffic lights -- they are tweaking (not twerking) them to improve the traffic flow. And doing a really good job at least at one intersection where I always enjoyed watching the long stream of semis head out of town.

The twerking, by the way, I assume, still goes on at the south end of Main Street.

There is still a sense of the wild, wild west out here. 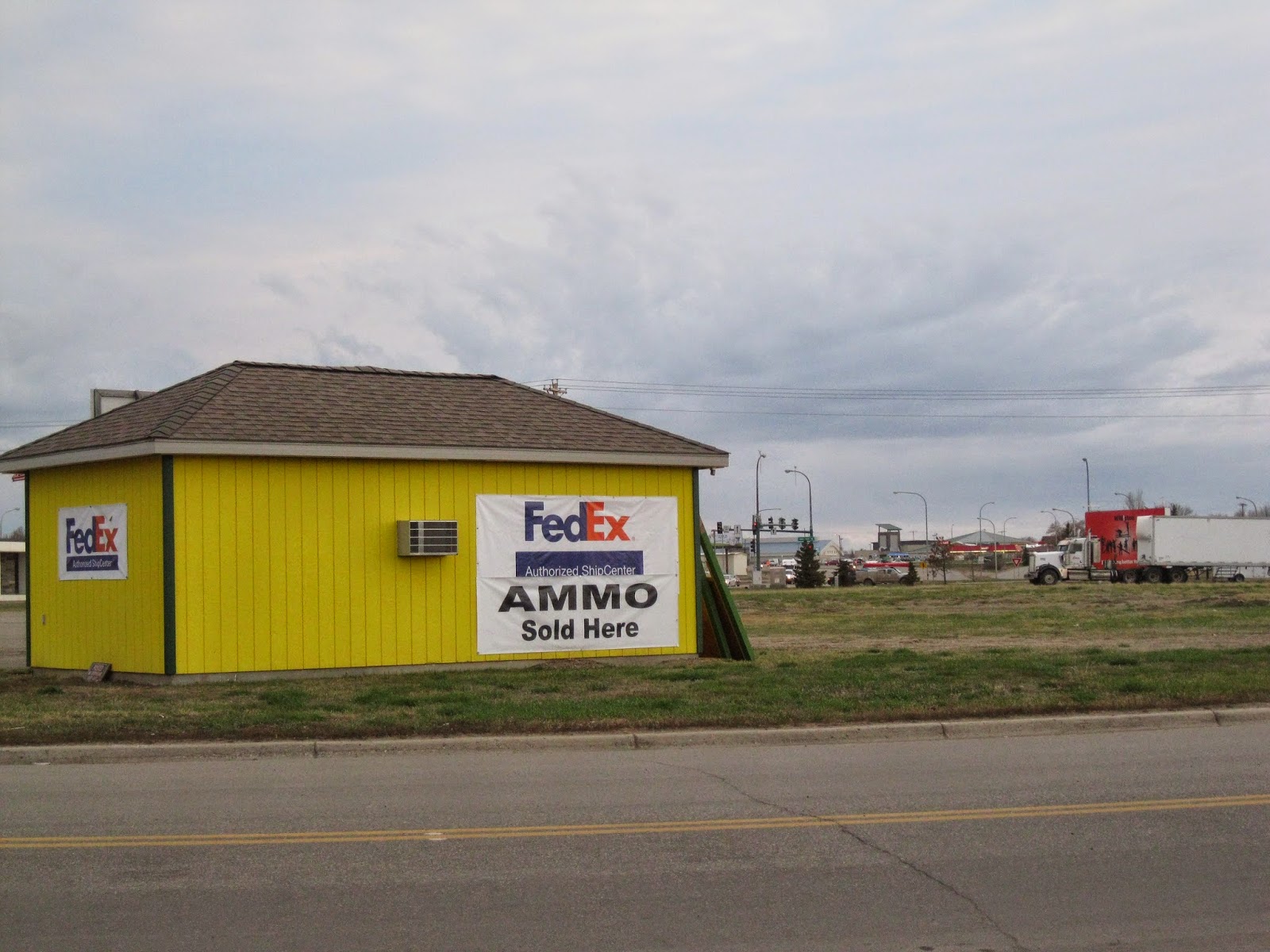 Corner of probably the busiest intersection in Williston, where the bypass intersects the "Million Dollar Way." Applebees is to the left, just across the street from this little building. The air conditioning unit is of note, considering many folks think Williston is 11 months of winter and one month of summer, August.

One of the things that strikes me every time I come to Williston: the guys that are actually doing the work, you know the ones, the truck drivers, the rough necks, the guys you would like to have around if being deployed to Libya, look really, really happy. I never hear a discouraging word. Of course that's not entirely true, but it's not far from the truth, and it's remarkable enough to be noted.

To be continued, perhaps. I have an appointment with my dad. (This has not been proofread; I assume there are typographical errors.)
Posted by Bruce Oksol at 10:31 AM